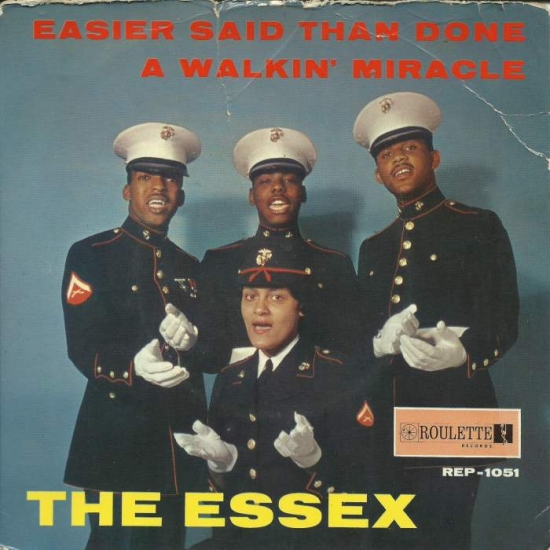 Not a lot of my segues or smooth from one song to another, but in terms of sheer coincidence, few concurrent top songs allow me such a dovetailing opportunity.

The last number one song, “Sukiyaki” was written (though widely misinterpreted) as a protest against the United States presence in Japan, much of which was (and still is) in Okinawa.  Okinawa is one of the southern islands of the country and has multiple bases.  It is here where the story of our next number one song originates.

Stationed at that base in the early 60s was Walter Vickers and Rodney Taylor and they would form a band.  They would be transferred to Camp LeJeune in North Carolina and they recruited three other marines (Billie Hill, Rudolph Johnson and Anita Humes) to join their group.  They recorded a demo for Roulette Records and after being signed they would release “Easier Said Than Done”, a song that was written by Larry Huff and William Linton.

Allegedly, the group didn’t particularly care for the tune, but America in July of 1963 did.  It isn’t hard to see why.  The song is catchy with a soft R&B feel, and with Humes vocal it also felt sassy and strong.  It also went to #1 on the R&B Chart, so it felt like this could be the start of something big.

As they were all still in the military, promoting their single proved difficult as was any kind of follow-up.  Their second single, “A Walkin’ Miracle” went to #12, but their third single, “She’s Got Everything” only reached #56, and the chart positioning of The Essex came to an end.

As for the group itself, they would disband shortly after.  Rodney Taylor was killed in 1966 during an attempted mugging in New York City.  Humes embarked on a solo career, but never had a hit of any capacity.

While technically The Essex is not a one-hit wonder, they might as well be.  With the impending British Invasion coming, this group and their limited discography was quickly forgotten.  To the best of my knowledge, “Easier Said Than Done” hasn’t been featured in any major movie or television show and it was usually left off of musical compilations of the era.  All of this rendered this former number one act to a blip on the musical radar.

I guess staying in the public consciousness is “easier said than done”.[1]