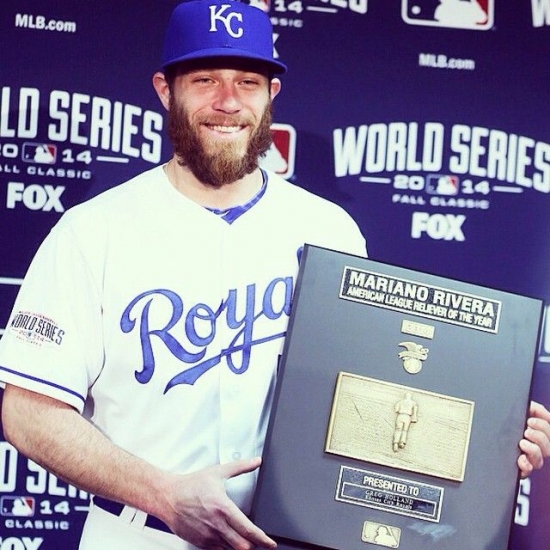 These awards honor the best modern closers after being named after two Hall of Famers.

Greg Holland was in his fifth year in the Majors, all of which were in Kansas City.  An All-Star in 2013, Holland was so again in 2014, and posted a 1.44 ERA with a 0.914 WHIP. Holland was ninth in Cy Young voting this year, and he helped the Royals win the American League Pennant.  The Royals won the World Series in 2015, but Holland had to leave late in the season for Tommy John Surgery.  He came back in 2016, but with St. Louis. Holland came back in 2020 to the Royals.

It didn’t take long for a Yankee to win an award named after a Yankee, but it did take Miller long to win an award of any kind as a Major League Pitcher.  Miller debuted in 2006 for Detroit, and he would later play for Florida, Boston and Baltimore, joining the Yankees in 2015.  This was his only year as a closer, and only full year with the Yankees, as he was traded to Cleveland during the 2016 Season.  Miller finished ninth in Cy Young voting this year and had a 0.859 WHIP.

Mark Melancon began his career with the New York Yankees, and he would later throw for Houston and Boston before becoming a Pittsburgh Pirate in 2013.  An All-Star in 2013, Melancon was so again in 2015, where he led the National League in Saves (51) where he was eighth in Cy Young voting.  He led the NL in Games Finished (67) the following year, though he split the season with the Pirates and Washington.

Zack Britton began his career with the Baltimore Orioles in 2011, and he would be promoted to the team’s closer in 2014.  Britton was an All-Star in 2015, leasing the American League in Games Finished (58), with 46 Saves and a 1.92 ERA, but he took that good number and sliced by nearly two-thirds with a 0.54 ERA.  Britton led the AL in Games Finished that year (63) and Saves (47) and was an All-Star for the second time as well as the fourth-place finisher for the Cy Young.

Kinbrel joined the Boston Red Sox in 2016, going to his fifth All-Star Game.  This was best year in Boston, as he was an All-Star again where he again won the TSN Pitcher of the Year, and was sixth in Cy Young voting.  Kimbrel became the first player to win the Hoffman and Rivera Award. He won a World Series Ring the following year, and he would leave Boston for the Cubs, going three-for-three in All-Star Games.

Jansen followed up his 2016 Hoffman winning year with another one, and did so at an even higher level.  Jansen dropped his ERA to 1.32, had a WHIP of 0.746 and posted a blistering of SO/BB of 15.57.  Jansen was fifth in Cy Young voting that year.

Edwin Diaz may not have won a game this year, but who cares? He led the AL in Saves (57), and Games Finished (65) and he matched his sub-2 ERA with an even more impressive WHIP of 0.791.  Diaz, who went to the All-Star Game this year, was eighth in Cy Young voting.

From the 12 Saves, you could see that Hader was not the primary closer, but as relief pitching changes, so do stats for an award such as this. Hader fanned 143 batters, a filthy amount considering he only threw 81.1 Innings.  His 15.8 SO/9 and 0.811 WHIP were incredible, and he was named to the All-Star Game in what was his second year in the Majors.  He was also seventh in Cy Young in voting.

A four-time All-Star with the Cincinnati Reds and World Series winner with the Chicago Cubs, Chapman later became a Yankee (twice actually) and in 2018 he was an All-Star for the first time in the American League.  2019 was Chapman’s sixth All-Star year, but first winning any individual award with his 37-Save year.

Hader was a more traditional closer this year, but his Strikeout rate remained astronomical with a 16.4 SO/9.  An All-Star for the second straight year, Hader had another great WHIP with a 0.806.  He would become the first back-to-back Hoffman Award winner.

The native of Perth, Australia, Liam Hendriks was in his tenth season, and his second as a closer.  In the COVID-19 stricken year, Hendricks also posted a WHIP of 0.671 and was ninth in Cy Young voting.

For the first time in the history of the award, we have a winner who was not a closer, so much so that he had ZERO Saves.  Devin Williams was incredible this year, allowing only one Run in his 27 Innings Pitched.  He was so good in this season, that he had a SO/9 of 17.7 with a WHIP of 0.630. Amazingly, Williams was a rookie, and also won the Rookie of the Year Award.  He also finished seventh in Cy Young Award voting.

We can’t wait to see how this award plays out in the future.

We go back to the baseball playoffs, and the ALCS and NLCS MVPs.