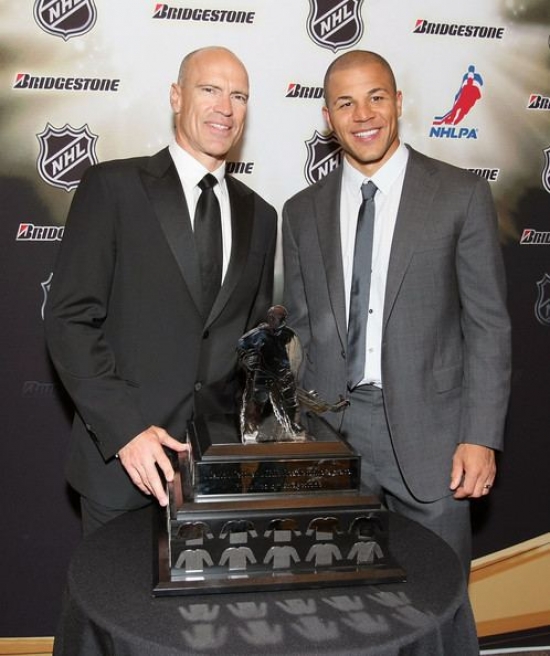 Last time, we looked at the Lester B. Peasrson, awarded annually to the top MVP as voted on by the players of the National Hockey League.  We stay on the ice with the newest award, the Mark Messier Leadership Award, which was first awarded in 2007-08.  Named after Hall of Famer, Mark Messier, it is designed to honor an individual who leads by positive example through on-ice performance, motivation of team members and a dedication to community activities and charitable causes.

So how many Mark Messier Leadership winners have made the Pro Hockey Hall of Fame?

The following are the past players who have won the Mark Messier Leadership Award who are eligible for the Hockey Hall of Fame and have been enshrined.

At age 45, Chelios had literally been a leader for decades, and despite his age, he was in the NHL for three more seasons. The American Defenseman had won three Norris Trophies, was a five-time First Team All-Star, and won three Stanley Cups; one with Montreal and two with Detroit.  It is hard to debate that this award did not get off to a perfect start.

This was Sundin’s penultimate year in the NHL, and his last with the Toronto Maple Leafs.  A Maple Leaf since 1994, Sundin was a leader on the ice since day one, and was Toronto’s best player for over a decade.  He had previously been a Second Team All-Star twice.

Iginla was not just Calgary’s leader, but had been the Flames best player for years.  This was his third First Team All-Star season, and seven years before he was the winner of both the Art Ross and Lester B. Pearson Award.  Iginla would later play for Pittsburgh, Boston, Colorado and Los Angeles.

The following are the players who have won the Mark Messier Leadership Award who are eligible for the Hockey Hall of Fame and have not been selected:

Since the franchise relocated from Winnipeg to Phoenix, Shane Doan was the best and most important player for the franchise when they were in Arizona.  Doan led the Coyotes to a Conference Final this year, and he was with Phoenix for his entire 21-year career.

Alfredsson was in his 17thand final year as an Ottawa Senator, and while he couldn’t lead them to a Stanley Cup, he was the leader on many good Senator teams.  He played one more year in Detroit, and scored 1157 career Points.

Eligible since 2017.  Ranked #5 on Notinhalloffame.com.

The following are the players who have won the Mark Messier Leadership Award Trophy in the NHL who have retired but have not met the mandatory years out of the game to qualify for the Hockey Hall of Fame:

The following are the players who have won the Ted Lindsay who are still active.

At age 23, it will be difficult to envision another Mark Messier Leadership Award winner to be younger than Sidney Crosby.  This season, Crosby was in his fifth NHL season, and was a Second Team All-Star and a Rocket Richard winner.  He was already a Hart Trophy winner, and would be again four years later.  Crosby is a three-time Stanley Cup Champion.

33 Years Old,Playing for the Pittsburgh Penguins.

43 Years Old,Playing for the Boston Bruins.

Dustin Brown helped lead the Kings to a Stanley Cup in 2012, and he did it again this season.  Brown was an All-Star in 2009.

This season Toews led Chicago to their third (and his) Stanley Cup win of the decade.  The Center had previously been named a Second Team All-Star (2013), a Conn Smythe winner (2010) and Frank J. Selke Trophy winner (2013).

32 Years Old,Playing for the Chicago Blackhawks.

Weber had been the core player in Nashville for years by this time and prior to this Mark Messier Award, he was twice a First Team All-Star, twice a Second Team All-Star, and had five top-four finishes for the Norris Trophy.

35 Years Old,Playing for the Montreal Canadiens.

Foligno also won the King Clancy Award this year, marking the first time that a Blue Jacket won either.

For the second year in a row, the winner of the Mark Messier Leadership Award also won the King Clancy.  Engelland was the first Golden Knight to win this trophy.

This is the first and to date only Mark Messier Leadership winner who split his award-winning season between two years.  Simmonds was dealt from Philadelphia to Nashville for their playoff run, and this was mostly due to his overall contributions as a Flyer.

32 Years Old,Playing for the Buffalo Sabres.

Giordano is a late-bloomer of sorts, winning his first Norris Trophy at age 35 and setting personal statistical bests.  To date, Giordano has played his entire career with Calgary, and has been their leader for years.

37 Years Old,Playing for the Calgary Flames.

Leadership in team sports is important, and as we see, they are often from players who could be considered the best player on the team.

We have one NHL Award left, the William M. Jennings, which is awarded annually to the team of Goalies that have the fewest Goals Against.