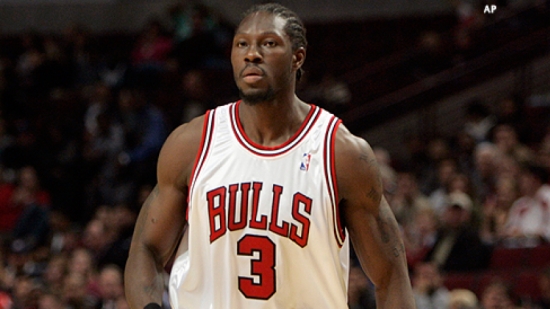 Ben Wallace was coming off four straight Defensive Player of the Year awards and was a champion with the Detroit Pistons in 2004.  The Chicago Bulls signed him as a Free Agent in 2006, and Wallace was set to being his defensive skills to the Windy City.

Wallace wasn't the DPOY in 2006-07 but was a Second Team All-Defensive Selection, finishing sixth in the NBA in Rebounds (10.7) and tenth in Blocks (2.0).  He would help anchor the Bulls to an upset sweep over Miami in the opening round of the 2007 Playoffs, and though they did not win another round (losing to his old team, Detroit, in the Quarter-Finals).  Chicago looked to be on the rise, or so they thought.

The Bulls got off to a horrific start in 2007-08, and Wallace was shipped to Cleveland as part of a three-team trade.  "Big Ben" only played 127 Games for Chicago, but he averaged 9.9 Rebounds and 1.9 Blocks per Game for them.

More in this category: « 49. Guy Rodgers