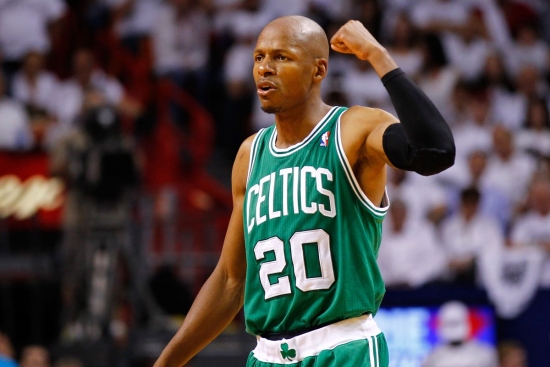 Ray Allen had already proven himself as a star with the Milwaukee Bucks and Seattle SuperSonics, but it was with the Boston Celtics where he would win his first NBA Championship.  The superstar shooter was traded from the Sonics before the 2007-08 season where he joined Paul Pierce and an incoming Kevin Garnett to form a "Big Three" and Allen, who no longer had to carry the workload (and also was getting a little older) may have scored less but was still very efficient and in his first year with the Celtics he was an NBA Champion.

In the five seasons that Allen was with Boston, Allen was an All-Star three times and had a higher True Shooting (.606), Free Throw (.914) and Three-Point Shooting Percentage (.409) than he did with any other franchise.  He would average 16.7 Points per Game, and the Celtics were always in the playoffs every year that he was there, this including the 2008 Finals win and a 2010 Finals appearance.  He did alienate his former teammates when he surprisingly took less money to play for the Miami Heat as a Free Agent, where he would win another title.

The Shooting Guard would enter the Naismith Basketball Hall of Fame in 2018.