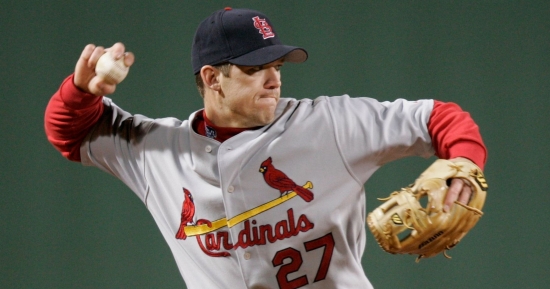 Arriving midway through the 2002 season after demanding a trade out of Philadelphia, Scott Rolen proved to be the same star he was in the NL East and he actually raised his game.  Rolen was an All Star in 2002 (though represented Philadelphia and he would be one in his first four full seasons as a Cardinal.  Already respected for his defensive ability, Rolen would win three more Gold Gloves in St. Louis, his 2004 accolade also coupled with leading the National League in Defensive bWAR.  That year was also his best in the majors with the bat as he had a career high 34 Home Runs with a Slash Line of .314/.409/.598.  He would finish fourth in MVP voting that year.  Arguably his 2006 would be far more memorable as he would be a vital component of St. Louis World Series win.

Rolen’s numbers as a Cardinal would see him belt 150 Home Runs with 880 Hits and a .282 Batting Average.