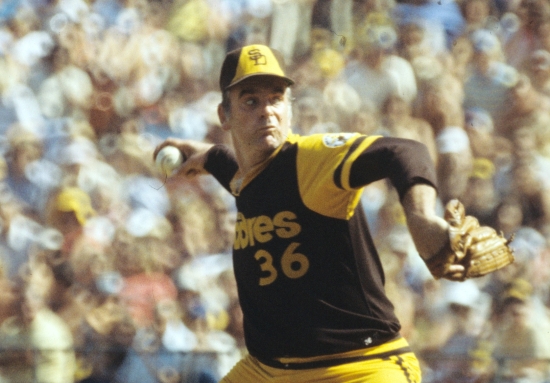 Gaylord Perry was already an established superstar when the Texas Rangers traded him to San Diego before the 1978 season, and the 1972 American League Cy Young winner was poised to add more trophies to his mantle.

The spitball specialist led the NL in Wins in 1978 (21), and he made history as the first hurler to win the Cy Young in both leagues.  Perry turned 40 during his second year with San Diego but was still good, going to his fifth (and final) All-Star Game, while posting a 12-11 record with a 3.06 ERA.  He was traded back to Texas afterward, leaving San Diego with 33 Wins against 17 Losses and a 2.88 ERA.

While Perry’s sabermetrics hold him back on this list, and it could be argued that he should not have won the ’78 Cy Young, he DID win it, and it will never be taken from him.

Perry entered the Baseball Hall of Fame in 1991.