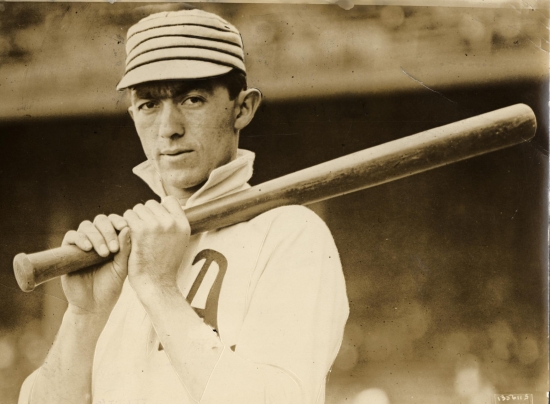 When you are called "Home Run," it would make perfect sense that you would be an individual that won four Home Run Titles.  Although, this was the dead ball era, and the man in question did so with totals of 11, 10, 12, and 9.

That doesn’t matter, because John Franklin “Home Run” Baker was still the leader, and that was the moniker he was given.

Baker arrived in Philadelphia as "The Player to be Named Later" in 1908, and he would be named the starting Third Baseman the season after.  The Athletics had put together an excellent team, both with bats and arms.  The Philadelphia infield would be dubbed the $100,000 Infield with Baker and Third, Jack Barry at Short, Eddie Collins at Second, and Stuffy McInnis at First.

Baker was also a vital piece in the Athletics' three World Series Championships (1910, 1911 & 1913), and he batted at least .375 in each winning World Series.  He would have nine hits in each Fall Classic win and had three Home Runs overall in the post-season for Philadelphia.

Sadly, Baker was one of the many players that the Athletics were looking to jettison in cost-cutting moves, and when he tried to renegotiate his contract with Connie Mack, it proved pointless.  He sat out the entire 1915 Season, and Ban Johnson, who was then the President of the American League, pressured Mack to sell his contract, which he did to the New York Yankees for the 1916 Season.

Baker would enter the Baseball Hall of Fame in 1955.