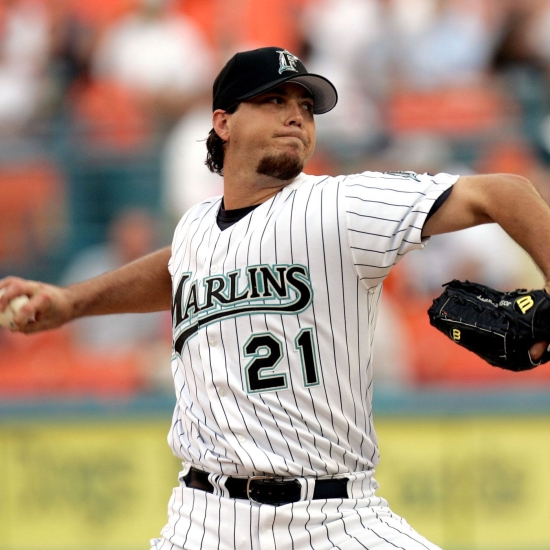 Josh Beckett was a three-time All-Star in Boston and World Series Champion with them in 2007, but his heroics began in Florida, where if you had not been paying attention, his 2003 World Series run came out of nowhere.

That was not the case, as Beckett arrived in Professional Baseball highly touted as the Second Overall Pick in 1999 following being named by USA Today as the High School Player of the Year, and the same publication named him the Minor League Baseball Player of the Year in 2000.  He made it to the Majors as a September callup in 2001 and was on the roster the whole season in 2002, albeit with an average season (6-7, 4.10 ERA).

Beckett was the Opening Day Starter in 2003 and had a pleasant season with a 9-8 year with a 3.04 ERA, which was decent, but he was on fire in the playoffs.  He would win Games in both the NLCS and World Series, with the latter seeing Beckett with a 1.10 ERA and 0.796 WHIP.  Beckett was named the World Series MVP, and the Marlins stunned the world by winning their second title.

This might seem like a low rank for a World Series Champion, but the reality is that Beckett’s run, save for 2005 and his 2003 post-season, was average, and he only appeared in 106 Games.  That being said, you can’t tell the Marlins story without Beckett.