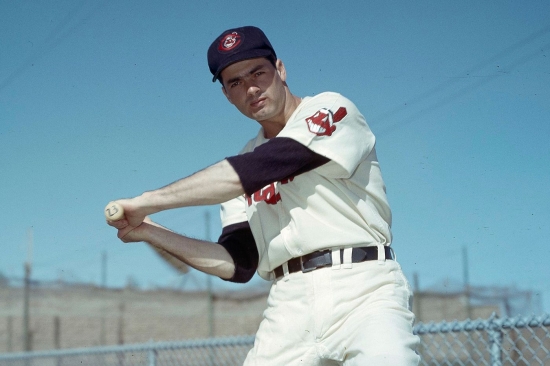 One of the most popular players of his day, Rocky Colavito, was a player that it was hard to hate…even if he was hitting a Home Run against your team.

Colavito was powerful at the plate and in the outfield, where his throwing arm became legendary.  He made it to the Majors in 1955 for a handful of games, but was second in Rookie of the Year voting with 21 Home Runs in only 322 At Bats.  An instant fan favorite, Colavito broke through to league stardom in 1958 with a 41 HR, .303 year, and was third in MVP voting. Colavito did not go to the All-Star Game in 1958, but he did in 1959, where he was fourth in MVP voting and led the American League in Home Runs with 42.  This made him the first Indians player to bash 40 taters in two straight years.

When you have that much power and are beloved by the fans, what is a team to do?  Apparently, trade for Harvey Kuenn and his high Batting Average.  Indians fans hated the move, and they hated it more when Colavito continued to go yard, and Kuenn’s career fizzled out.

They would get a second run with Colavito when he was traded from his then team, the Kansas City Athletics, in 1965, and he had a career renaissance with the Indians, going to two straight All-Stars, winning the RBI Title in 1965 (108) with a fifth-place finish for the MVP. He declined in 1967 and was traded during the season to the White Sox.

With Cleveland, Colavito had 190 Home Runs with a .495 Slugging Percentage, and he was chosen for the Indians' Hall of Fame in 2006.