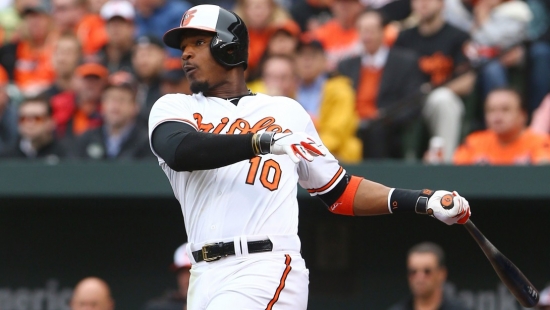 Adam Jones was one of five players traded by the Seattle Mariners for Canadian Pitcher, Erik Bedard, in the Winter of 2008.  Had it just been straight-up Bedard for Jones, the Mariners still would have lost the trade.

Jones took over at Centerfield that year, and he would hold that spot for 11 seasons.  He would be chosen for the All-Star Game five times, and he showed off a good power game hitting at least 25 Home Runs annually from 2011 to 2017, with two of those years seeing Jones smack over 30.  Belting 263 Home Runs for the Orioles, he would also bat .279, but his .319 On Base Percentage was low, and cost him at least a few spots on this list.

Defensively, Jones was more than capable, collecting four Gold Gloves and leading the American League outright in Total Zone Runs in 2008 with a sparkling 25.  He never was close to that again, but he was an asset to the Orioles defense.

Sadly, Jones did not play for a lot of good Baltimore teams, but he did he so the playoffs in three of his years in Baltimore.  He left the team as a Free Agent in 2019 and would compile 1,781 Hits with 263 Home Runs, and 866 Runs Batted In.