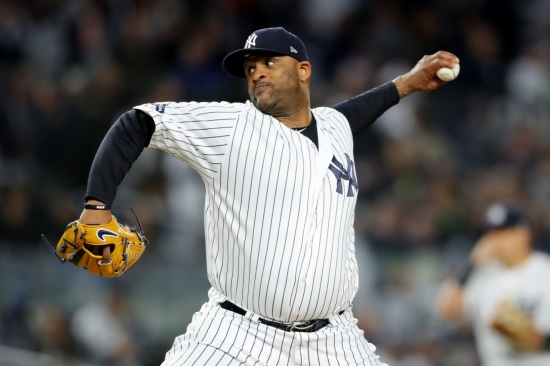 A 19-year veteran, C.C. Sabathia debuted with the Cleveland Indians in 2001, and showed immediately that he was a star, finishing 17-5, leading the AL in H/9 (7.4), and had it not been for Ichiro Suzuki, would have been named the American League Rookie of the Year.

Sabathia remained the ace of the Cleveland staff for the next six seasons, going to the All-Star Game in 2003, 2004, and 2007, the last year of which was an electric campaign for the Californian.  Sabathia won the Cy Young in that season, with a 19-7 record, a 3.21 ERA, 209 Strikeouts, and a league-leading 5.65 SO/BB.  The following season, Sabathia's contract was up. With the Indians struggling, he was traded to Milwaukee for their playoff run. He while the Brewers did not win the World Series, he was a large part of their playoff appearance, having led the NL in Complete Games (7) and Shutouts (3), despite only playing in the league for half of it.  Sabathia's stock had never been higher, so it was only natural that he would sign with the biggest boys on the block, the New York Yankees.

Joining the Bronx in 2009, Sabathia came in as another weapon for the Yankees.  Sabathia led the AL in Wins in both 2009 and 2010 and was in the top four in Cy Young voting over the next three years and going to three more All-Star Games (2010-12).  He helped New York win the World Series in 2009, and while he went into decline in the mid-10s, he was still capable of quality starts and helping the Yankees make post seasons.

Should C.C. Sabathia be in the Hall of Fame?