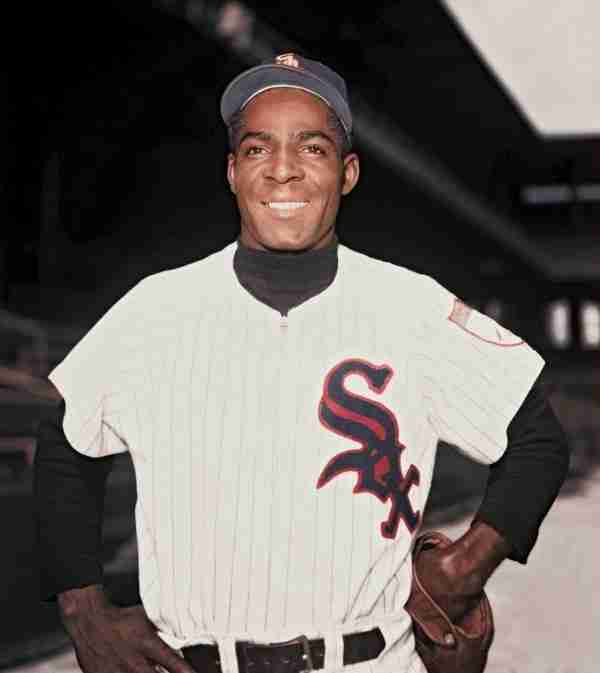 Minnie Minoso may be known for being the first (and our guess the last) baseball player to play in five different decades.  It may seem impressive, but it was a marketing gimmick which had Minoso play a couple of games in 1976 and 1980 to achieve this honor.  Minoso was a popular player and capable athlete who had the ability to perform the task.  We would rather think of the 1951 to 1960 version of Minnie Minoso who may have been the most underrated player in the league and whose play was anything but gimmicky.

Prior to joining Major League Baseball, Minoso was already a star in the Negro Leagues.  Upon his full year with the White Sox in 1951, it was apparent that Chicago had a star on its hands.  Minoso was the first black man to play for the Chisox but he was instantly popular with fans of all colors.  He did so many things well and would do anything and everything to find a way to get on base.  He was by many accounts close to being a five tool player (he may not have had enough power numbers) and had he hit just a few more dingers he may have been placed on a higher level from fans outside of Chicago.

Minnie Minoso remains a very popular figure among the fans of the Chicago White Sox, and as well he should.  He is as likable a figure as it comes and he was a great player in his day.  Hopefully, he will be remembered for the time he was great instead of for the time he was exploited.  An induction to the Baseball Hall of Fame would go a long way to ensure that his legacy is a proper one.

Should Minnie Minoso be in the Hall of Fame?

Should Minnie Minoso be in the Hall of Fame?

-2 #2 Dennis O. 2014-11-01 15:34
Minnie Minoso is the best candidate for election at the December 2014 Veterans Committee Election for the time period 1947-1972. There are some fine potential candidates out there in Kaat, Allen, Tiant, Oliva and Hodges, but in my opinion Minoso must get elected next month or the Hall Of Fame will be looked at as nothing more than a joke.
The few voters who said that there's no way Minoso deserved to be in the Hall Of Fame must be among the stupidest people on Earth!
Quote
-1 #1 Darryl Tahirali -0001-11-30 00:00
Minoso is an interesting case. First, yes, let's put aside the gimmick of having played in five decades. That leaves the 11 years between 1951 and 1961 when he was a productive everyday player, and he might indeed be one of the most underrated players during this period: .305/.395/.4 71, averaging 169 H, 29 2B, 16 HR, 98 R, 89 RBI, 18 SB (and 11 CS) per year. He also averaged 16 HBP per year and led the League in HBP every one of these years except one, and he is 9th lifetime in HBP with 192. (Why am I reminded of Stein from the original Bad News Bears?)Minoso' ;s ability to get on base (lifetime he's a tick below HoFer Frank Robinson and a tick above HoFer Tony Gwynn) looks attractive in today's OBP-centric view, and he did walk more than he struck out.Bottom line: Minoso looks good, even very good--but he is not great, either during a peak period or over the course of his career. His career position-pla yer WAR (Baseball Reference; 52.8) and OPS+ (130) are, again, very good, but his WAR is lower than Edgar Martinez, Larry Walker, Alan Trammell, Lou Whitaker, Tim Raines, and Bobby Grich--all of whom deserved to be ranked higher on this list than Minoso, if not inducted into the Hall before Minoso.In OPS+, Minoso looks stronger, as he ranks higher than Grich, Trammell, Whitaker, and even Raines, who was a left fielder like Minoso. Grich, Trammell, and Whitaker were all middle infielders, and thus have a higher value than Minoso--left field is a low-skill defensive position compared to a middle position, and a Hall of Fame LF should flash gaudier offensive stats than does Minoso, who was a good defensive outfielder-- but even if you compare Minoso to Raines, it's no contest: Raines has the greater counting numbers--tha t's longevity--b ut even if Raines's qualitative numbers except WAR are a little lower, there is this: Minoso might rank 9th in getting hit by a pitch--but Raines ranks 5th in stolen bases (808). Minoso might have been underrated, but Raines was a game-changer , the best all-around leadoff hitter of his era not named Rickey Henderson.I realize that Minoso's fate is in the hands of the Veterans Committee while Raines is still on the BBWAA ballot, so my comparison is because both played the same position, not that there is a direct choice between the two. And although I do not think that, ultimately, Minoso is Hall-worthy, I do think that he is ranked too highly on this list. (As is Gil Hodges, but that's another story.)
Quote
Refresh comments list
RSS feed for comments to this post