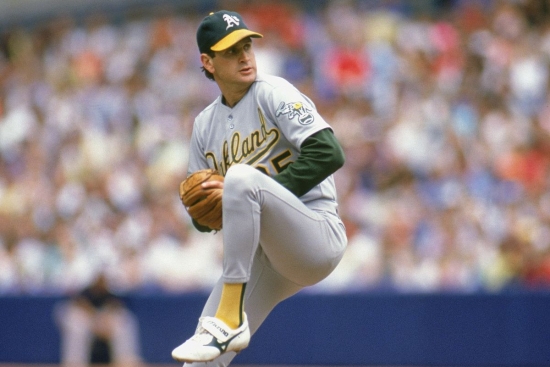 Bob Welch split his career between two California teams, the Los Angeles Dodgers and the Oakland Athletics, and he brought success to both of those squads.

Welch first appeared in a Dodgers uniform in 1978, and the Starting Pitcher went to the All-Star game in 1980.  Welch helped Los Angeles win the 1981 World Series, and he was a consistent winner, gaining the "W" 137 in the 1980s, third-most overall in the decade.  Welch would have five 14-Win years in Dodger Blue and twice finished eighth in Cy Young voting (1983 & 1987).

The hurler was traded to Oakland before the 1988 Season, and in his first year in Oakland, he played against his former team in the World Series, losing to the Dodgers.  Oakland won the World Series in 1989, but Welch did not play in the series sweep over San Francisco, though Welch won 17 Games in his first two seasons as an Athletic.  In 1990, Welch was an All-Star again, and he led the American League in Wins (27) and won the Cy Young.  The A's won the Pennant again but were upset by the Cincinnati Reds.

Should Bob Welch be in the Baseball Hall of Fame?