This page generously sponsored by: Nobody yet! Sponsor it on Patreon to be the first name on this list!
We can’t imagine that anyone would doubt that should Morrissey crack the Rock and Roll Hall of Fame, it should be with the Smiths before his own solo career. Despite that statement, Morrisey’s solo efforts generated multiple hit singles (in England) and spawned critically acclaimed albums. His lyrics remained poignant, and with a voice as unique and as powerful as his, gaining attention was never a problem. Again we state, that his candidacy for the Hall really should only begin (once or if) the Smiths get inducted.

Should Morrissey be in the Hall of Fame?

MORRISSEY (RESCHEDULED FROM 3/20) AT HAMMERSTEIN BALLROOM IN NEW YORK, NY

Buy your Tickets to see Morrissey (Rescheduled from 3/20) at Hammerstein Ballroom in New York, NY HERE for as little as $! 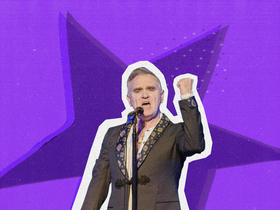 Buy your Tickets to see Morrissey at Hammerstein Ballroom in New York, NY HERE for as little as $!