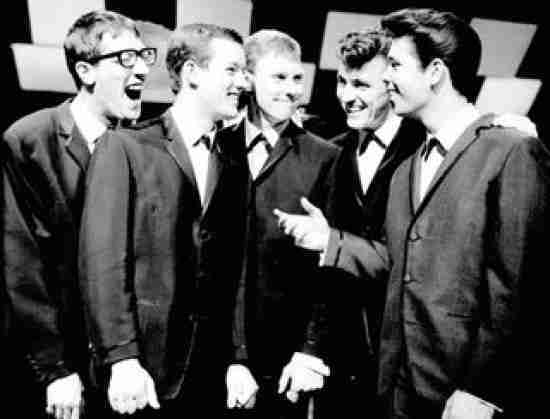 If you had more hits than the Beatles and the Rolling Stones combined you would think that you may be a lock for the Rock and Roll Hall of Fame. However, in the muddled case of Cliff Richard & the Shadows, this was a chart distinction held in Great Britain and not Stateside.

Trying to decipher the career of Cliff Richard & the Shadows takes a historian on two separate paths. Originally called the Drifters, the name evolved into Cliff Richard & the Shadows to capitalize on the good looks of the lead singer. As Richard’s popularity in the U.K. skyrocketed, the “British Elvis” was not alone in achieving fame. The Shadows achieved acclaim for their skills as well. The band became the first true British group to dominate the charts in their own country and it is no stretch to say that they were England’s first real Rock Stars. Cliff Richard would make his own albums simultaneously to that of the Shadows but the latter continued to back up Richard on tour. The combined work (and this could be the only case on this list where we feel compelled to do so) of Cliff Richard & The Shadows has reached legendary status in Britain and as the first cog of the British Invasion, their place in music history is undeniable. The biggest knock on them is their lack of American success where they are a footnote to history rather than history themselves.

Should Cliff Richard and the Shadows be in the Hall of Fame?

Should Cliff Richard and the Shadows be in the Hall of Fame?

+8 #3 Namella 2017-08-11 02:00
I always picture the R'n'R HOF induction committee as a bunch of jaded lawyers and business executives. Of course they wouldn't understand the appeal of Black Flag. Did Black Flag make any money for them?...And they're biased. They think rock'n'roll caters to American culture, so tough luck if you were the bee's knees in Britain, but not so much in the States...You 've got to fight this policy...so, being an American not very familiar w/C. Richard & The Shadows, but loving their enormous success story, I say put 'me in. On principle.
Quote
+25 #2 Lee Roschen 2013-08-30 01:07
Other artists have already been inducted in the RRHF that were big in England or whatever the country of their origin, but had limited success in America. Cliff has been as huge a success in England as Elvis Presley was in America. However, Elvis burned himself out at age 42 while Cliff is still chugging along and has been performing and recording for well over 50 years! If the RRHF was located in England instead of the U.S.A., Cliff Richard would have been nominated and inducted DECADES ago! He is a world class musician, and still performs every concert as if it were his last! This honor for Cliff (with or without the Shadows) is LONG OVERDUE.
Quote
+20 #1 Olivia Newton-John 2013-07-20 01:35
I can't believe Cliff isn't in the Hall of Fame already. Cliff and The Shadows should definitely be in there! Go Cliff!
Quote
Refresh comments list
RSS feed for comments to this post