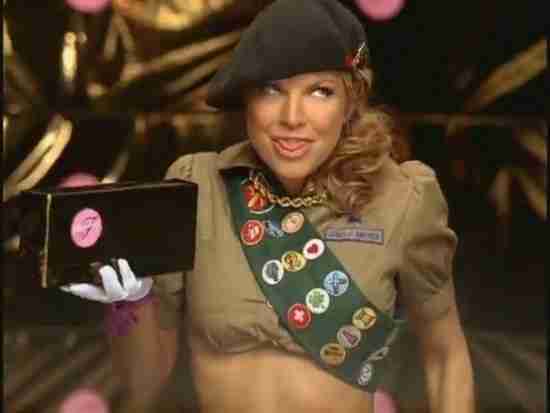 
An awful trend started around 2005.  Despite having different sounds earlier in their career, Gwen Stefani, Nelly Furtado and Fergie all seemed to morph into the same person.   No, they didn’t look the same, but they all kind of sounded the same, and you weren’t really sure who was trying to imitate who.  Regardless, they were all capable of better things, and though all were successful with their new styles, they had certainly done much better by our eyes.  Possibly the worst dreck of that lot was Fergie’s testament to her own sexuality, the narcissistic song, Fergalicious.

The entire song is Fergie telling everyone that she is so hot.  Granted, she is a very attractive woman who does ooze sexuality, but she has a look that tells us that when she hits the wall, it’s going to be bad; oh and that wall isn’t that far away.  Her self aggrandizing lyrics are coupled with her failing to use the vocal talents she does have.  Amazingly this ignited a mini feud with Furtado which was basically over who was the bigger whore (we’ll actually believe that Nelly is the bigger ho-bag, just a hunch), though they should have been arguing over who sucked worse.  Fergalicious?  More like Crapalicious.

How awful is Fergalicious?

+1 #1 Darryl Tahirali -0001-11-30 00:00
Is it just me, or does Fergie look like Benny Hill in that picture? Fergie Scuttle, maybe?Benny Hill--now, there was a guy with some musical talent. And, no, I'm not kidding.
Quote
Refresh comments list
RSS feed for comments to this post