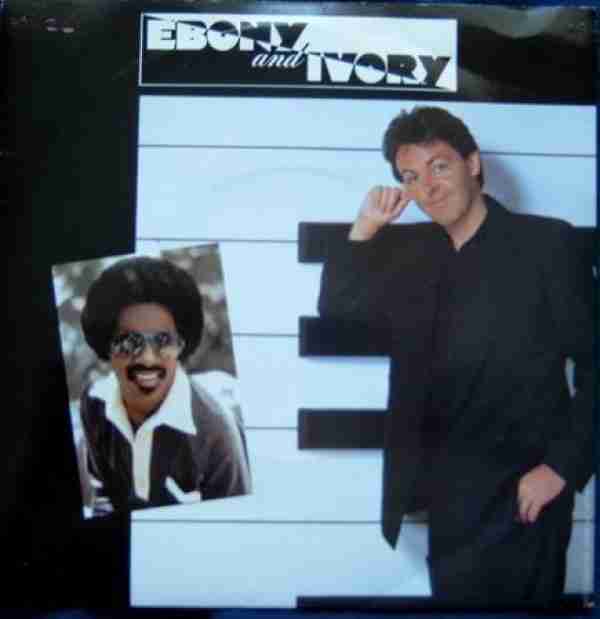 These are two artists who should not be on a list like this.  In the twenty years leading up to this awful song, Paul McCartney and Stevie Wonder had established themselves as two of the most important figures in modern music history.  So when these two collaborated on a song people bought it because who could believe that two giants possibly misfire?

Their collaboration, Ebony and Ivory did become another monster hit, but it wasn’t long before the song’s corny feel was obvious to everyone and undermined the tune’s attempted content.  The song of course is a metaphor, the black (ebony) keys and the white (ivory) keys of a piano also symbolize the racial issues of black people and white people.  You see, if the keys of could work together in perfect harmony, than people could do the same.  Simple isn’t it?

It isn’t known however if the white keys appropriated the sound and culture of the black keys on occasion as McCartney didn’t really mention it when he wrote it.  Sadly, the message is delivered in such a syrupy way, that it is devoid of any social consciousness and is now a karaoke staple but only in a mocking way.  On a positive note, people of all colors are now united in their belief that this song does suck.

How awful is Ebony and Ivory?

0 #2 Knuckles 2012-05-22 15:56
My answer to a recent Facebook picture that showed John and Paul walking on Abbey Road carrying George and Ringo on their backs. How megalomaniac al do you have to be to write this dreck and act serious about it?
Quote
0 #1 Musicologist999 -0001-11-30 00:00
I'm sure Sir Paul and Stevie had their hearts in the right place when they made this song, but "Ebony & Ivory" is just musically boring. A big hit in its day, but nobody except rabid McCartney fans will dare to touch it now. Too bad.
Quote
Refresh comments list
RSS feed for comments to this post