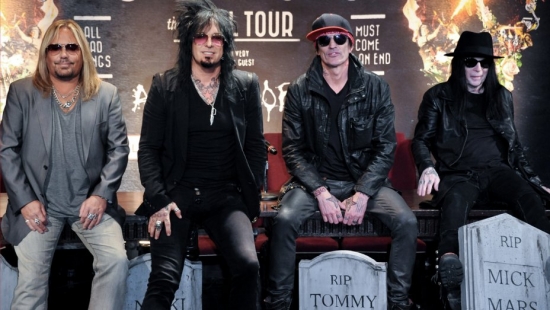 Our apologies, as we wanted to take a bit of time to digest this but the news has been making the rounds that Motley Crue have taken over the number one spot in the kiosk-driven “Your Choice” poll, which exists physically at the Rock and Roll Hall of Fame in Cleveland, Ohio.

Crue took the spot from Blink-182, and it marks the first time that someone other than Blink-182 has held the top spot.

So, what exactly does this mean?

In theory nothing and in theory everything.

How it does not mean anything is that just because those who cross the turnstiles of the Rock Hall may think that Motley Crue should be in the Rock and Roll Hall of Fame it does not mean that the committee who actually makes that decision will agree. Many bands/artists have been lobbied for the Hall and are still on the outside looking in or have waited what was perceived to be far too many years for induction and the Hall has historically ignored many of those plights.  Although…

When the bands/artists are nominated for the Rock and Roll Hall of Fame, they put up an online poll, which allows the fans to have their voice as to who they want in.  While this does not mean that whoever they grant the highest votes will automatically gain entry, history has shown that they do listen.

This of course, does not mean that Motley Crue will be nominated for the Rock and Roll Hall of Fame next year.

For the record, this is the current top ten of the vote:

While again it is not guaranteed that Motley Crue will get inducted they have a lot of momentum.  The Netflix biopic about them (The Dirt) has performed well and raised their profile and has a lot more people looking at why they are not in the Rock and Roll Hall of Fame. What also helps in the recent induction of Def Leppard as rarely do artists of a similar genre get nominated together.  This has to help Motley Crue.

Either way, we will be watching!

More in this category: « We have added to our 2020 and 2021 Hockey Futures Rashad Evans named to the UFC Hall of Fame »