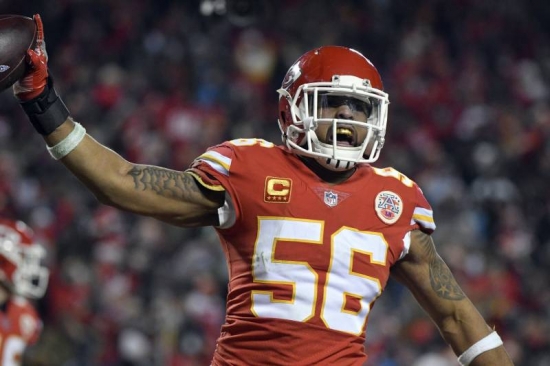 The retirements just keep on coming in the National Football League!

Linebacker, Derrick Johnson just signed a one-day contract with the Kansas City Chiefs so that he could retire at Arrowhead.  He had played with the Oakland Raiders last year after playing with Chiefs from 2005 to 2017.

Johnson was drafted 15thoverall from the University of Texas where he was slotted immediately as the team’s Left Outside Linebacker.  He would switch to Right Inside Linebacker in 2010 and would go on a four-year streak of 100 or more tackles.  He would be named to the Pro Bowl in 2011, 2012, 2013 and 2015 and was a First Team All-Pro in 2011.  His career at Kansas City would see him record 27.5 Sacks, 14 Interceptions and 1,151 Tackles.

Coincidentally, we have almost completed our Notinhalloffame.com All-Time Top 50 Kansas City Chiefs and Johnson is currently penciled in at #13.

We here at Notinhalloffae.com would like to wish Derrick Johnson the best in his post-playing career.

More in this category: « The Video Game Hall of Fame Announces the Class of 2019 The Carolina Panthers announced four new names for their Hall of Honor »