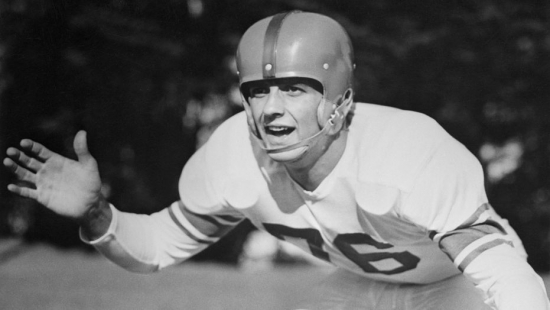 It was just announced that pro football legend, Gino Marchetti, passed away today at the age of 93.

Drafted in the 2ndRound from the University of San Francisco in 1952 by the Dallas Texans, Marchetti joined the Baltimore Colts when they relocated the year after and from 1954 to 1964 he was chosen for the Pro Bowl 11 years straight.  The Defensive End was one of the most dominating pass rushers of all-time and he was also a two-time NFL Champion with the Colts.

Marchetti entered the Pro Football Hall of Fame in 1972.

We here at Notinhalloffame.com would like to extend our condolences to the friends, family and fans of Gino Marchetti at this time.

More in this category: « Our Top 50 All-Time Chicago Blackhawks are now up C.C. Sabathia reaches 3,000 Strikeouts »