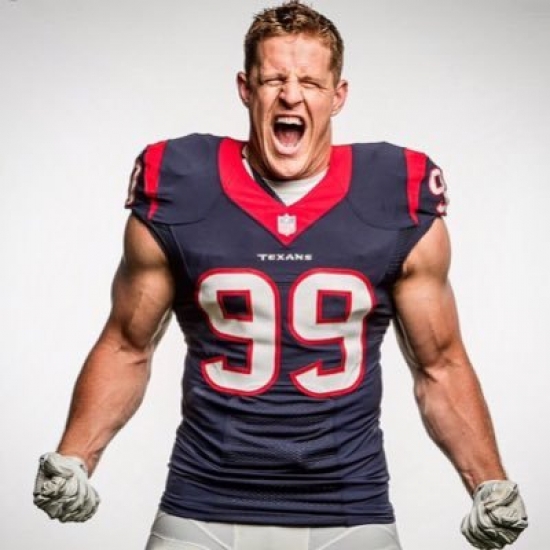 Never underestimate how much First Team All Pro Selections mean in terms of the Pro Football Hall of Fame.  While it is possible to enter Canton without one, this accolade tells everyone that in that particular year you are the best at your position.  Now granted it means more in some positions than others (Special Teams for example will always struggle to get players inducted) but this is a vital step to get into the Hall.

Rather than look at the 2018 First Team All Pro Selections by position, let’s list them in order of how many they have in total.

5th: J.J. Watt, Defensive End: Houston Texans.  Watt was named a First Team All Pro each season from 2012 to 2015 but injuries prevented him earning any accolades the last two seasons.  He is clearly back!  Watt is currently an eight year veteran of the National Football League.

5th: Luke Kuechly, Linebacker: Carolina Panthers.  Kuechly was a First Team All Pro in 2013 2014, 2015 and 2017 previously and he is a six time Pro Bowl Selection over his seven season career.

4th: Aaron Donald, Defensive Lineman: Los Angeles Rams. Donald has been chosen for his fourth straight First Team All Pro and he is a five year veteran.  Donald received the maximum number of votes.

4th: Bobby Wagner, Linebacker: Seattle Seahawks.  This is Wagner’s fourth First Team All Pro and third in a row.  He is a seven year veteran, all with the Seahawks.

3rd: Zach Martin, Right Guard: Dallas Cowboys.  In five seasons in the NFL, Martin has been a Pro Bowl in all of them and a First Team All Pro in three.  This is a Hall of Fame caliber start.

3rd: Khalil Mack, Defensive End: Chicago Bears.  In four seasons with Oakland, Mack went to two First Team All Pros.  In his fifth season in the NFL and first in Chicago he was chosen for his third First Team All Pro.

2nd: Todd Gurley, Running Back: Los Angeles Rams. Gurley is in his fourth season and this is his second straight selection.  He led the league in Rushing Touchdowns (17) and had 1,251 Yards with another 580 from the air.

2nd: Tyreke Hill, Wide Receiver (Flex Selection): Kansas City Chiefs.  Hill was a First Team All Pro in his rookie season and this his third year in the NFL. The Kansas City Chief caught 87 passes for 1,479 Yards and 12 Touchdowns.

2nd: DeAndre Hopkins, Wide Receiver: Houston Texans.  Hopkins was first chosen for this honor in 2017 and this year he caught 115 Passes for 1,572 Yards and 11 Touchdowns.

2nd: Travis Kelce, Tight End: Kansas City Chiefs.  The first time he did this was in 2017 and this is now his sixth season in the NFL.  Kelce set personal records with 103 Receptions, 1,336 Receiving Yards and 10 Touchdowns.

1st: Michael Thomas, Wide Receiver: New Orleans Saints. In his third season, Thomas continued his streak of 1,000 Receiving Yard seasons with a career high of 1,405.  He would lead the NFL in Receptions with 125 and he caught 9 Touchdown passes.

1st: David Bakhtiari, Left Tackle: Green Bay Packers. This is his sixth season in the NFL and he on a 90 Game starting streak.

1st: Quenton Nelson, Left Guard: Indianapolis Colts.  Nelson is a First Team all Pro as a rookie.  The sky is the limit for Nelson.

1st: Fletcher Cox, Defensive End: Philadelphia Eagles. Cox has been in the league now for seven years and he has been named a Pro Bowler in the last fourth however this is the first time that he received a First Team All Pro.

1st: Darius Leonard, Linebacker: Indianapolis Colts. This is Leonard’s rookie season and he would lead the National Football League in Solo Tackles.

1st: Kyle Fuller, Cornerback: Chicago Bears.  In the fourth season of Fuller’s career he was chosen for his first Pro Bowl and First Team All Pro this year.

1st: Stephon Gilmore, Cornerback: New England Patriots. This is Gilmore’s seventh season and it is first time being named a First Team All Pro.

1st: Eddie Jackson, Safety: Chicago Bears.  Jackson’s first time being named an All Pro comes in his sophomore year.  Two of his six Interceptions were ran back for Touchdowns.

1st: Derwin James, Safety: Los Angeles Chargers.  We have another rookie off to a great start by earning this accolade.

1st: Desmond King, Defensive Back: Los Angeles Chargers. King was also used as a Returner this year for the Chargers.

1st: Michael Dickson, Punter: Seattle Seahawks.  Dickson is a rookie and you can’t ask for a better start.

1st: Andre Roberts, Kick Returner: New York Jets.  This is the ninth season for Roberts and his fifth team as he played previously for Arizona, Washington Detroit and Atlanta.

1st: Tarik Cohen, Punt Returner: Chicago Bears.  Cohen is a sophomore with the Bears and he was the leader in Punt Return and Punt Return Yards.

We here at Notinhalloffame.com would like to congratulate all of the 2019 First Team All Pro Selections.