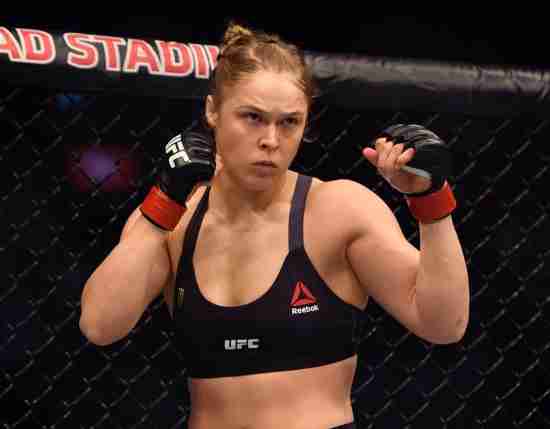 During the UFC 225 card it was announced that Ronda Rousey will become the next member and first female into the UFC Hall of Fame.

Rousey, who now works for WWE, was arguably the sports first female megastar. She main evented multiple shows and was responsible for hundreds of thousands of pay per view buys. Rousey’s success transcended the sport and she would become a multi-media sensation, bestowing the covers of many magazines, appearing in films and hosting Saturday Night Live.

In the octagon, Rousey entered the world of Mixed Martial Arts after winning the Bronze Medal in Judo in the 2008 Olympics. Rousey began her MMA career slowly and shortly after joining Strikeforce she would win the Women’s Bantamweight Championship from Miesha Tate. She would defend her title shortly after by defeating Sarah Kaufman in a contest that did not go past one round. This was a pattern for Ronda Rousey as she would win he first six professional fight in one round. The UFC came calling and she would become the first female signed to UFC.

After being anointed by UFC as the inaugural Bantamweight Champion Rousey continued her dominance. She would submit Liz Carmouche in her first title defense and would again defeat Miesha Tate in what would be her only fight that went three rounds. Rousey’s next four title defenses (Sara McMann, Alexis Davis, Cat Zingano & Bethe Correia) would see her destroy her opponents in a combined 2:12, which is possibly the most dynamic stretch in UFC championship history.

In what was considered a huge upset, Holly Holm knocked out Rousey in the second round in the main event of UFC 193 and she would fail one year later to take the title back when she lost to Amanda Nunes. This would be her last professional fight.

Ronda Rousey retired with a record of 12 and 2 with 11 of her wins coming within one round. While there might be some critics who feel that Rousey is not the pioneer of women’s MMA and should not be the first female inductee she is the most influential female fighter of all time.

She will join the hall as this year’s Modern Era inductee. The other inductees are Matt Serra (Pioneers Wing), Bruce Connal (Contributors Wing), Art Davie (Contributors Wing) and Mauricio Rua vs Dan Henderson (Fights Wing). The ceremony will take place on July 5.

We here at Notinhalloffame.com would like to congratulate Ronda Rousey on achieving this prestigious accolade.