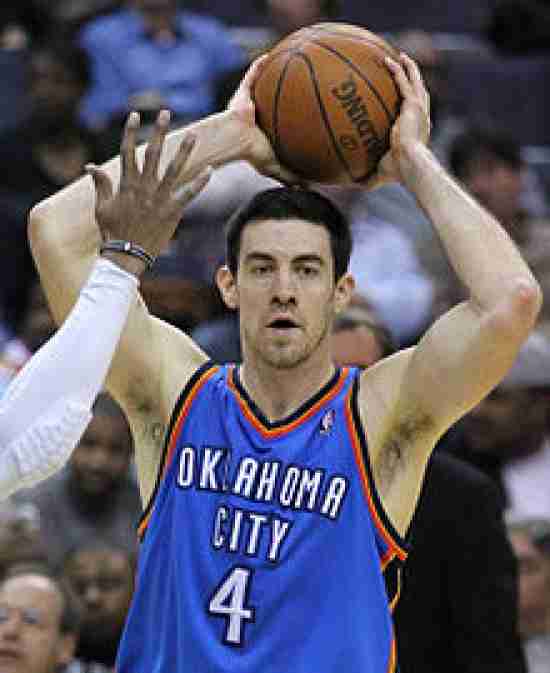 After 14 seasons in the National Basketball Association, Nick Collison of the Oklahoma City Thunder has announced his retirement from Professional Basketball.

Collison was a star player at Kansas where in 2003 the big man was named a Consensus First Team All-American and the Big 12 Player of the Year and would be drafted 12th overall by the Seattle SuperSonics. He would play his entire career with the organization, joining them as they relocated to Oklahoma City.

While he was a superstar at Kansas, Collison was mostly used off of the bench, starting only 177 of the 910 games he played. He retires with Per Game Averages of 5.9 Points and 5.2 Rebounds and is franchise history he is third in Games Played, fourth in Rebounds and sixth in Blocks.

With his retirement there is no player left who came following the move from Seattle to Oklahoma City.

While we are unlikely to rank him once he is Hall of Fame eligible, he should eventually find a spot in the College Basketball Hall of Fame. Once we get to ranking those who should be consider for the College Hall, expect to see Collison’s name right up there!

We here at Notinhalloffame.com would like to congratulate Nick Collison for his career in basketball and we wish him the best in his post-playing career.

More in this category: « The St. Louis Cardinals announce their Hall of Fame Class of 2018 The Buffalo Bills to retire Thurman Thomas' number »