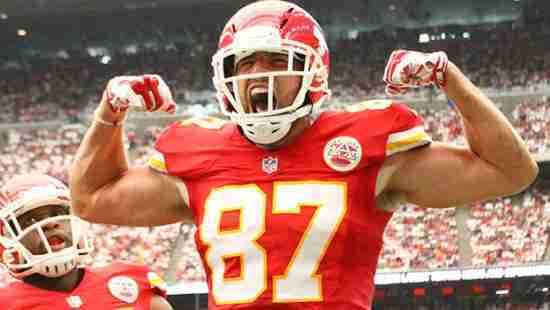 We have another major update here at Notinhalloffame.com as our Football list of those who should be considered for the Pro Football Hall of Fame has gone through a major revision.

Last February, 6 of our top 10 were selected (Ray Lewis #1, Jerry Kramer #2, Randy Moss #3, Brian Dawkins #7, Terrell Owens #8 and Brian Urlacher #9) as was another top 15 (Robert Brazile #15). This has brought as expected a major overhaul in our top 10 list but with the addition of three strong first ballot entries none of the returning entries will crack the top three.

Our Notinhalloffame.com Football Top Ten is:

Former Tight End Tony Gonzalez debuts at number one. Gonzalez is without question the greatest Tight End ever and if you don’t agree with that, you can’t argue that he is not the best in terms of pure offensive skill. The former dual sport star from UCLA is second all-time in Receptions and is a 14 time Pro Bowl Selection. If anyone on this list has a speech ready to go it should be Tony Gonzalez!

Champ Bailey makes his inaugural appearance on our list at #2. The Cornerback dominated his position for years and went to twelve Pro Bowls as well as being chosen for three First Team All-Pro rosters.

Former Defensive Player of the Year Ed Reed arrives at #3. Like Gonzalez and Bailey, Reed has the credentials of a first ballot Hall of Famer. The Safety is a nine time Pro Bowl and five time First Team All-Pro Selection and is a Super Bowl winner with the Baltimore Ravens. He is also the all-time leader in Interception Return Yards.

Alan Faneca returns at #4 and is the highest ranked returnee from our list. The Offensive Lineman has been a Finalist the last two years and is a nine time Pro Bowl and six time First Team All-Pro Selection. He won a Super Bowl with the Pittsburgh Steelers.

Chuck Howley is the highest rated former player who would need to get in via the Senior Committee. Howley, the MVP of Super Bowl V and six time Pro Bowler remains at #5.

Four time Super Bowl Champion L.C. Greenwood also holds the same rank as last year as he holds at #6. The former Pittsburgh Steeler was a six time Finalist and like Howley would need the Senior Committee to get inducted.

Johnny Robinson jumped from #10 to #7. The longtime Kansas City Chief is a former Super Bowl winner and was a Finalist six times. He too needs to enter via the Senior Committee.

From the Denver Broncos’ famed “Orange Crush”, Randy Gradishar jumped from #12 to #8. The former Linebacker was a two time Finalist was the Defensive Player of the Year in 1978 and was a seven time Pro Bowl and five time First Team All-Pro Selection.

Three time Super Bowl Champion Running Back Roger Craig moves up to #9. Craig was a Finalist in 2009.

Gonzalez, Bailey and Reed are not the only new entries.

Four time Pro Bowl Selection London Fletcher enters our list at #66. Fletcher was a Super Bowl with the St. Louis Rams and is one of four players to have participated in 250 straight games.

Regular visitors to Notinhalloffame.com know that we eventually plan to grow our core sports lists to 150 and as such we are allowing new entries to push our Football list beyond 100. We have two new entries in the lower end of the list with Asante Samuel at #97 and Brian Waters at #102.

Take a look at our new list (which can be found here) and let us know who you think should be in the next Pro Football Hall of Fame Class.