The Sedin Twins to retire from the NHL 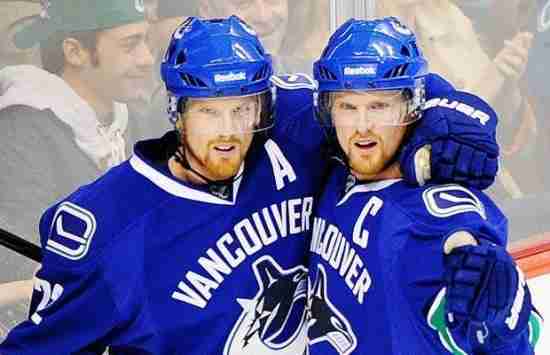 A major announcement took place in the world of the National Hockey League as the Sedin twins of the Vancouver Canucks have announced their impending retirement at the end of the regular season.

Through clever maneuvering in the 1999 Draft the Canucks were able to draft Henrik and Daniel Sedin first and second overall to create the backbone of the franchise for the next seventeen years. While they did not join the NHL right away (they elected to play one more season professional in Sweden) they would slowly become an elite scoring tandem in the biggest professional league in hockey.

Playing Centre and Left Wing on the same line respectively, both Sedins will retire with over 1,000 career Points, which while it does not put them in the top 40 all-time in scoring is more than Hall of Fame worthy in the current era. The Hall of Fame also looks at the trophy case and with that the Sedins are more than adequately qualified.

In the 2009-10 season, Henrik Sedin won the Hart Trophy and the Art Ross. No player who has ever won both ever failed to get into the Hall. Throw in two First Team All Star selections and a King Clancy Award and the mantle seems stocked for Henrik.

Daniel Sedin may never have won a Hart Trophy, but in the 2010-11 season he won the Lester B. Pearson Award, which is the MVP award as voted on by the players. That year he was also an Art Ross Trophy winner and a First Team All Star.

To be clear, the Sedins only said that they were retiring from the NHL and did not say whether or not they would continue to play in Europe. Should they do so, their Hall of Fame clock does not begin as the institution recognizes competitive play in Europe and deems those players active. As such, we will wait to see what transpires before we

Regardless it seems unlikely that the Sedins won’t get in immediately and will likely go in together.

We here at Notinhalloffame.com would like to congratulate Henrik and Daniel Sedin on a wonderful career in the National Hockey League and wish them the best in the post NHL career.

More in this category: « Major Update: Our Baseball List has been revised The WWE HOF Legacy Wing Class of 2018 is announced »