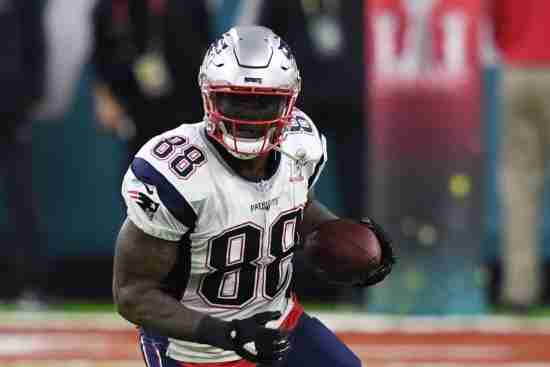 ‘Tis the season for retirements in the world of Professional Football and today brought us another significant one as Tight End Martellus Bennett is calling it a career.

From Texas A&M Bennett was drafted in 2008 in the second round by the Dallas Cowboys and was used to backup Jason Witten. With Witten on the roster, Bennett was never going to be the primary threat at Tight End for Dallas but he showcased exceptional blocking skills and gained quite the following for his outspoken and occasionally controversial comments.

After his four year contract expired, Bennett signed with the New York Giants where he became a starter for the first time. It was a good season for the Tight End, but he signed in 2013 with the Chicago Bears and continued to increase his production. He would have his best season in 2014 where he was named a Pro Bowl and recorded 90 Receptions for 916 Yards.

Prior to the 2016 season, Bennett signed with the New England Patriots where he complimented Rob Gronkowski perfectly and would help the Patriots win the Super Bowl in their come from behind win over the Atlanta Falcons. He would finish his career with the Packers and after being waived he resigned with New England and went to the Super Bowl again albeit in a loss against the Philadelphia Eagles.

Martellus Bennett would accrue 433 Receptions for 4,573 Receiving Yards and 30 Touchdowns. He will be eligible for the Pro Football Hall of Fame in 2023, though he is unlikely to get any consideration.

We here at Notinhalloffame.com would like to congratulate Martellus Bennett on a wonderful career and wish him the best in his post-playing endeavors.

Kirk Buchner, "The Committee Chairman", is the owner and operator of the site.  Kirk can be contacted at [email protected] . Email This email address is being protected from spambots. You need JavaScript enabled to view it.
More in this category: « The Canadian Football Hall of Fame announces the Class of 2018 Our Top 50 All-Time Cincinnati Reds are now up »