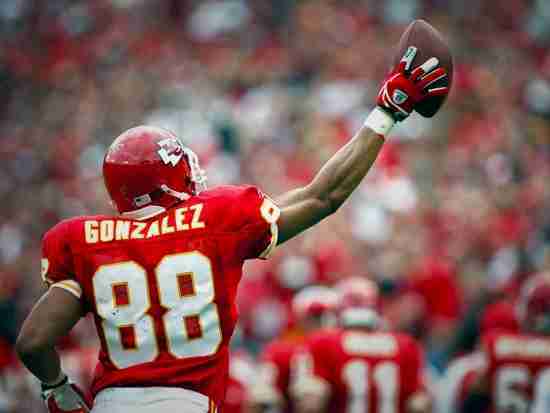 28 Jan
2018
Not in Hall of Fame
Tony Gonzalez will be eligible for the Pro Football Hall of Fame in 2019 and our guess (and isn’t it everyone’s?) that the former 14 time Pro Bowl Tight End will enter in his first try. While he is waiting for that accolade he has one Hall to enter first: the Kansas City Chiefs Hall of Fame.

Gonzalez (who also played basketball) was drafted out of UCLA 13th overall in 1997 and in his third season he would make his first of 10 Pro Bowls and first of five First Team All Pro nods. Gonzalez had four campaigns that exceeded 1,000 Yards (unheard of for a Tight End) and actually led the NFL in Receptions in 2004. In his 12 years with Kansas City, he tallied a whopping 10,940 Yards with 76 Touchdowns.

He will be honored at an Award banquet on February 24 and will be officially enshrined at Alumni Weekend this fall.

Gonzalez becomes the 44th player (and 48th member overall) to enter the Chiefs Hall of Fame.
Tagged under
Tweet