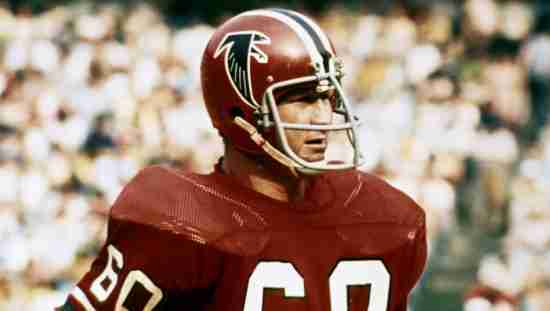 13 Dec
2017
Not in Hall of Fame
It was announced today that Tommy Nobis, former College Linebacker at the University of Texas and professional for the Atlanta Falcons died today at his home. He was 74 years old.

Nobis is one of the most revered players in Longhorn history, and justifiably so. As a sophomore, Nobis was already the anchor of a Texas defense that would help the team win the National Championship in 1963. As a senior, he would win the Knute Rockne Award (Best Lineman), the Outland Trophy (Best Interior Lineman) and the coveted Maxwell Award.

As expected, Nobis was the number one pick by the expansion Atlanta Falcons in the 1966 draft. Dubbed “Mr. Falcon”, Nobis was an automatic impact player in the league. The Linebacker would win the Rookie of the Year honors and go to the Pro Bowl. He would go to four more Pro Bowls over his career and in 1967 was named a First Team All Pro. He would play all eleven of his National Football League seasons with the Falcons.

Nobis’s number 60 has been retired by both the University of Texas and by the Atlanta Falcons and he is a member of the College Football Hall of Fame.

We here at Notinhalloffame.com extend our condolences to the friends and family of Tommy Nobis.
Tagged under
Tweet

More in this category: « The Rock and Roll HOF Class of 2018 has been announced! Bob Costas to the Baseball HOF »