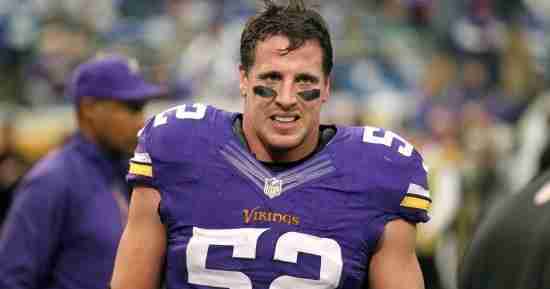 07 Mar
2017
Not in Hall of Fame
Chad Greenway announced that after 11 seasons in the National Football League, all of which were with the Minnesota Vikings, that he is calling it a career.

The former 1st Round Pick (17th Overall) from the University of Iowa would become a two time Pro Bowl Selection (2011 & 2012) and would start 144 of his 156 Games at Linebacker for the Vikes.  Greenway would record 18 Quarterback Sacks and 11 Interceptions.  He was named one of our top 50 Minnesota Vikings when we put that out last year.

Greenway is not likely to enter the Pro Football Hall of Fame, but he will be eligible in 2022.

We here at Notinhalloffame.com would like to thank Chad Greenway for a memorable career and we wish him the best in his post-playing career.
Tagged under
Tweet

More in this category: « Ravishing Rick Rude to be inducted into the WWE HOF We have added new entries to our 2019 Hockey Futures »