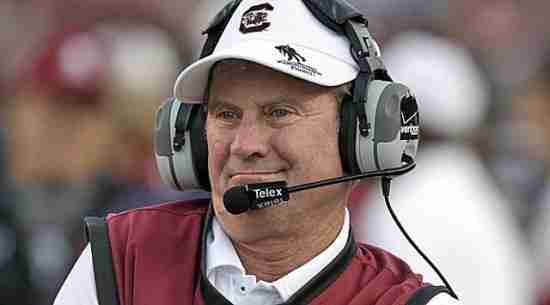 The College Football Hall of Fame has announced thirteen new entries for the Class of 2017 comprising of three Head Coaches and ten former players.

Head Coach, Steve Spurrier.  For many, this is the headliner of the 2017 Class.  Spurrier was already inducted as a player from his stint with Florida where he won the 1986 Heisman Trophy.  As a Head Coach, Spurrier took over the reigns of Duke where in three years (1987-89) he would win one ACC Championship and two ACC Coach of the Years.  He would move to his alumni, the University of Florida where he would win five SEC Titles and seven SEC Coach of the Year Awards.  Most importantly, he would take the Gators to the National Championship in 1996.  He was Florida’s coach for 12 seasons.

After a less than stellar performance coaching the Washington Redskins, Spurrier returned to the SEC and took over the reigns of the South Carolina Gamecocks.  He would win one SEC title and another two SEC Coach of the Year Awards.  His overall Coaching record is 228-89-2.

Head Coach, Danny Ford.  Ford took over as the Head Coach of the Clemson Tigers in 1978 and in 1981 he took the University to a consensus National Championship.  He would be named the ACC Coach and Eddie Robinson Coach of the Year in ’81 and is a five time ACC Champion.  He would also coach at Arkansas.  Ford had a coaching record of 122-59-5 and a 6-3 Bowl record.

Head Coach, Larry Kehres.  A former Quarterback at Mount Union, Larry Kehres would return as an Assistant Coach in 1974 and would be named their Head Coach in 1986, a position he would hold until 2012.  He would win 11 Division III Championships for Mount Union.

Quarterback, Peyton Manning.  Manning would become the #1 Draft Pick in 1998 after becoming a superstar at the University of Tennessee.  Manning would be named an All-American in 1997 and won the Davey O’Brien Award, the Johnny Unitas Golden Arm Award, the Maxwell Award and was named the SEC Player of the Year.  Manning threw for 11,201 Yards with 89 Touchdowns.

Quarterback, Matt Leinart.  Out of USC, Matt Leinart won a multitude of awards including the Pac-10 Offensive Player of the Year (twice), the Manning Award, the Walter Camp Player of the Year Award, the Johnny Unitas Golden Arm Award and of course the Heisman Trophy in 2004.  He would throw for 10,693 Passing Yards with 99 Touchdown Passes.  Most importantly, he took the Trojans to a National Championship in 2004.

Marshall Faulk, Running Back.  Faulk is already a Pro Football Hall of Famer and a Super Bowl Champion.  At San Diego State, the Running Back would finish 2nd and 4th in Heisman Trophy Voting (’92 and ’93 respectively) and rushed for 4,589 Yards with 57 Touchdowns as an Aztec.  He would win the NCAA Rushing Title in 1992 and is a two time Consensus All-American.

Adrian Paterson, Running Back.  At Georgia Southern, Peterson set the Rushing Record in Division IAA with 6.559 Yards.  He would also win the Walter Payton Award in 1999.

Kirk Gibson, Wide Receiver.  Gibson would become far more known for his prowess in Baseball, winning two World Series Championships, but at Michigan State he caught 112 passes for 2,347 Yards and 24 Touchdowns.  He would have the most Receiving Yards in the Big 10 twice.

Offensive Tackle, Bob McKay.  McKay was a Consensus All-American at the University of Texas and helped the Longhorns win the National Championship in 1969.

Brian Urlacher, Linebacker.  Urlacher was a star player at the University of New Mexico where he was named a Consensus All-American and the MWC Player of the Year in 1999.  He would have 442 Tackles in his collegiate career and would also be used as a Kick Returner and occasional Wide Receiver.

Dat Nguyen, Linebacker.  Playing at Texas A&M, Dat Nguyen changed the perception of the Asian-American Football Player.  With the Aggies, he led his school in Tackles four straight years and in 1998 was named the Big 12 Defensive Player of the Year, won the Chuck Bednarik Award, The Vince Lombardi Award and was a Consensus All-American.

Mike Ruth, Defensive Tackle.  Ruth would win the Outland Trophy and Consensus All-American Honors in 1985.  He played for Boston College.

We here at Notinhalloffame.com would like to congratulate the 2017 College Football Hall of Fame Class.
Tagged under
Tweet

More in this category: « The 2027 RRHOF Futures are now up Gaylord Perry supports Bonds, slams Rose »