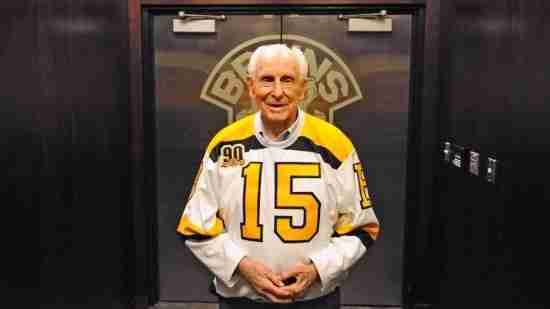 04 Jan
2017
Not in Hall of Fame
It is a very sad day for Hockey and the Boston Bruins specifically.

Milt Schmidt passed away today at the age of 98.

Joining the Boston Bruins in the 1936-37 season, Schmidt would soon center the “Kraut Line”, with his fellow junior teammates, Woody Dumart and Bobby Bauer.  This would become one of the most explosive lines in the game, and would lead the Bruins to Stanley Cup wins in 1939 and 1941.  Schmidt would lead the NHL in Assists and Points title in 1939-40 and would earn his first First Team NHL All Star Selection.

Like many players, Schmidt would leave the NHL to serve his country in World War II.  He would return for the 1945-46 season and return to elite form.  Schmidt would earn two more First Team All NHL Selections and in the 1951-52 season would win the coveted Hart Trophy.

Milt Schmidt never played professionally for any other team and would retire with 575 Points.  Following his playing career, Milt Schmidt would begin coaching the Bruins, a role he would have for eleven seasons.  He would leave that capacity with a losing record, but did find more success as a General Manager orchestrating a super trade that brought Phil Esposito and Ken Hodge to the Bruins, who combined with Bobby Orr would bring the Stanley Cup back to Boston 1970 and 1972.

Schmidt would leave the Bruins to become the General Manager of the expansion Washington Capitals, though he would be fired soon after as the team was not very good.

Milt Schmidt would enter the Hockey Hall of Fame in 1961 and would have his number retired by the Boston Bruins in 1980.

We here at Notinhalloffame.com would like to offer our condolences to the friends and family of Milt Schmidt at this time.
Tagged under
Tweet

More in this category: « The Pro Football HOF Announces their Finalists Diamond Dallas Page to enter the WWE HOF »