Jacqueline to the WWE HOF. 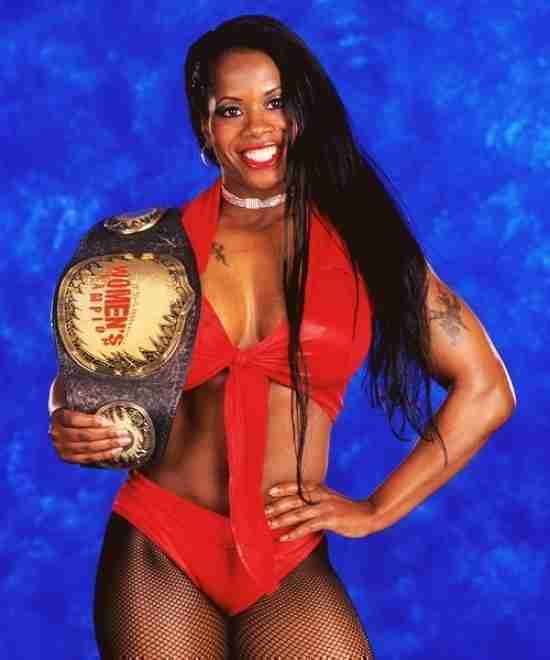 14 Mar
2016
Not in Hall of Fame
The next inductee to the WWE Hall of Fame has been announced, and as had been leaked earlier, Jacqueline Moore, professionally known in the WWE as Jacqueline will become the eighth female to enter the Hall.

Known for her toughness, Jackie first learned to wrestle in 1988 and cut her teeth in the World Class territory as “Sweet Georgia Brown”, but it was in the early 90’s in the USWA in the Texas VS Tennessee feud where she really gained attention.

Now known as Miss Texas, she served as a valet for Eric Embry and Tom Prichard and would wrestle other women of the territory.  She would become the first USWA Women’s Champion, a title she held eight times, and owns the distinction of being the first female to grace the PWI 500 annual list.  Still, she was looking for a national promotion and World Championship Wrestling came calling.

Now aligned with Kevin Sullivan, Jacqueline would become physically involved in his matches, though the partnership was short lived as she caused Sullivan to lose a Loser Must Retire Match when she inadvertently hit him over the head with a wooden chair.  She would later managed Harlem Heat and wrestled and defeated the Disco Inferno.  This gained her a higher profile, but gave her the opportunity to enter the WWF during their “Attitude Era”.

Jacqueline was immediately given her highest profile spot where she took over as the valet/manager for “Marvelous” Marc Mero and feuded with Sable.   Jacqueline would wrestle Sable at the 1998 Survivor Series for the long since vacated Women’s Title and would win the title.  While she would lose the Sable, she would remain in a high profile program aligning with Terri Runnells to form PMS, the Pretty Mean Sisters.

Jacqueline would win the title back in 2001 but would be relegated to a minor role, including a refereeing.  Her last program of note saw her win the Cruiserweight Title from Chavo Guerrero, though that title reign was not a long one.

While we did not have Jacqueline ranked that highly, it is definitely a groundbreaker as this marks the first time an African-American woman has been chosen for the WWE Hall of Fame.

We here at Notinhalloffame.com would like to congratulate Jacqueline Moore for receiving this honor.

More in this category: « Pete Rose to the Hall of Fame...sort of. Billy Corgan feels that Smashing Pumpkins are RRHOF worthy »