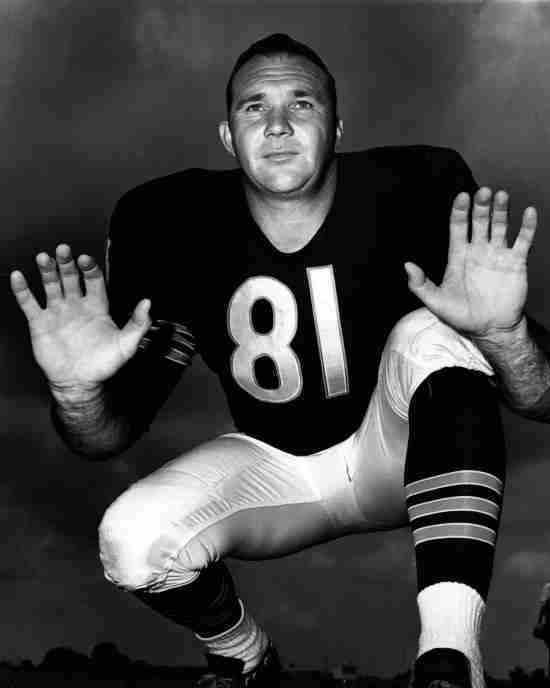 31 Dec
2015
Not in Hall of Fame
It is another sad day in the world of sports as Pro Football Hall of Famer, Doug Atkins died at the age of 85.

Atkins, a product of the University of Tennessee, was a freak of nature for his time.  Standing at six foot eight and weighing 280 pounds, Atkins was a physical specimen the likes of which the National Football League had never seen, at least not someone who possessed as much skill as he did.

Drafted eleventh overall by the Cleveland Browns in 1953, the Defensive End would be traded to the Chicago Bears and would emerge as a star for the “Monsters of the Midway”.  In Chicago, Atkins would help the Bears win the 1961 NFL Championship and would go to eight Pro Bowls and made a First Team All Pro.

At the age of 37, Atkins would finish his career with the expansion New Orleans Saints, and would have his number retired by the team due to the high regard he was held in.

To put in perspective the type of player that Atkins was, he was a player who both Johnny Unitas and Dick Butkus said they were afraid of.  Butkus was afraid of him?  Damn!

While Sacks were not an official stat when he played, it was estimated by Atkins that he had at least twenty-five Sacks in one season and he was known as one of the pass rushers of his day.

He is a member of both the College and Pro Football Hall of Fame.

We here at Notonhalloffame.com would like to extend our condolences to the friends and family of Doug Atkins at this time.

Kirk Buchner, "The Committee Chairman", is the owner and operator of the site.  Kirk can be contacted at [email protected] . Email This email address is being protected from spambots. You need JavaScript enabled to view it.
More in this category: « The Fictitious Athlete HOF Announces Our Class of 2015! Notinhalloffame.com wants your input! »