The Bella Twins to the WWE Hall of Fame 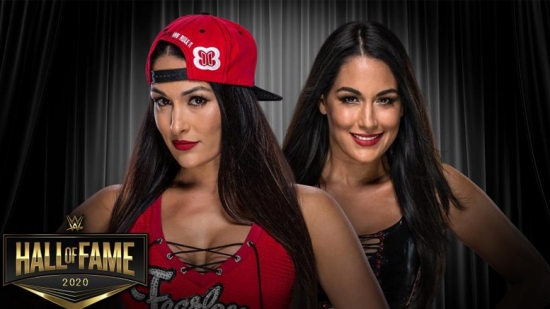 As speculated, on last night’s Friday Night Smackdown, the Bella Twins (Brie & Nikki) were announced as the newest members for this year’s WWE Hall of Fame Class.

Signed to WWE Developmental in 2007, they made their debut on the main roster in 2008. Their first few years were non-eventful, as they were involved in mediocre storylines, and often served as arm candy to the Guest Hosts on Monday Night Raw.  Both twins would win the Diva’s Championship in 2012, but they would leave the WWE in April of that year.

The came back before Wrestlemania I 2013, but they would have a higher profile role. Not only were they getting more screen time on the wrestling shows, they were the cornerstone of the new reality show in E!, “Total Divas.”  Nikki and Brie would feud in 2014, and while that did not last long, it was given a lot of attention on WWE programming.  Nikki won the Diva’s Title in November of 2014, when the Bellas reunited.

In 2015, the “Women’s Revolution” began, as fans saw the work of the females of NXT and started the hashtag of “Give Divas a Chance.”  Becky Lynch, Charlotte Flair and Sasha Banks were called up, and this coincided with the improved skills of the twins.  Nikki lost her championship to Charlotte Flair, and had to take time off due to neck and back issues.  Brie continued to wrestle, but would go into semi-retirement.

They both came back in the 2018 Royal Rumble, and later that year, Nikki challenged Ronda Rousey for the women’s title at Evolution.

The Bella Twins may not have been the best workers in the business, but they became very well known, and were two of the most recognizable female wrestlers in the 2010s.

We had not ranked them in our most recent Notinhalloffame.com WWE List, as we had them in the futures section instead.  This decision was due to their youth (once a wrestler is 46, they are automatically ranked), and their ability to come back full time if desired.

We here at Notinhalloffame.com would like to congratulate the Bella Twins for earning this honor.

More in this category: « The Rock Hall announces five new Board of Directors Darren Sproles feels he is a Hall of Famer »