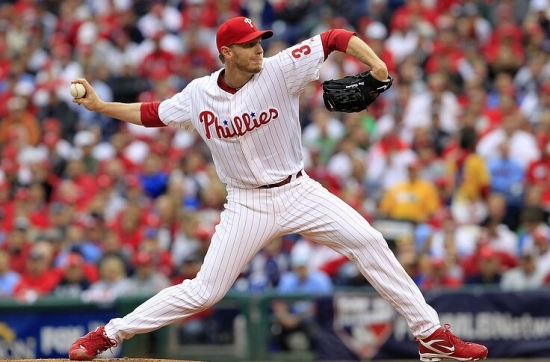 Regular visitors of Notinhalloffame.com know that we are slowly working on the top 50 of every major team in the NHL, NBA, NFL and MLB. Once that is done, we intend to look at how each team honor their past players, coaches and executives.  As such, it is news to us that the Philadelphia Phillies will be retiring the #34 of the late Roy Halladay, who died in 2017 plane crash.

The event will take place on May 29 on the tenth-year anniversary of his perfect game against the Florida Marlins.  In the four seasons that he played for the Phillies, he would win the 2010 Cy Young Award, was a two-time All-Star, and threw a no-hitter in the NLDS against Cincinnati.  Statically, with Philadelphia he had a record of 55-29 with a 3.35 ERA and 622 Strikeouts.

Halladay was inducted into the Baseball Hall of Fame in 2019. The Toronto Blue Jays have already retired his number.

In addition to the retirement of his number, a statue of Halladay will be placed in Third Base Plaza.

We here at Notinhalloffame.com would like to congratulate the family of Roy Halladay at this time.