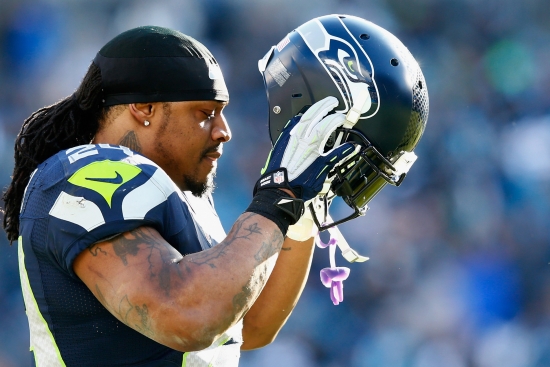 In April, we did our standard recap where we wished a player the best in their post-playing endeavors, with the individual person in question being Marshawn Lynch.  Let’s retract that as “Beast Mode” is back.

Lynch resigned with the Seattle Seahawks yesterday, and the five-time Pro Bowl Selection comes back with “unfinished business” as he said in a recent YouTube video.

We know what the unfinished business is.  At Super Bowl XLIX, the Seahawks were driving late in the game and were on the one-yard line.  It was expected that Lynch would get the ball, but instead a passing play was called that resulted in a Malcolm Butler interception.  That saved the game for the Patriots, and every arm chair quarterback in the world wondered why Lynch didn’t get the ball.

Last season, Lynch had 460 Yards from Scrimmage with the Oakland Raiders, and he has 12,595 in total.  Should the Seahawks win the Super Bowl, and Lynch has a good game, it would be huge for his Pro Football Hall of Fame chances.

As always will be watching.