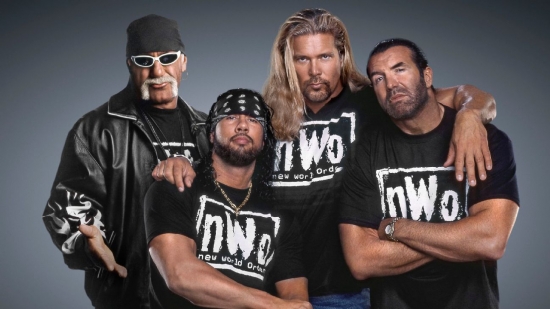 We haven’t gotten to the Royal Rumble yet, and it has been announced that the New World Order will be entering the WWE Hall of Fame.  The announcement came from ESPN.  The Hall of Fame ceremony will take place on April 2, 2020, as part of the Wrestlemania 36 weekend.

While there were many members of the NWO, only Scott Hall, Kevin Nash, Hulk Hogan and Syxx (Sean Waltman) will be inducted.

The New World Order angle tipped the ratings war in favor of World Championship Wrestling for nearly two years. Scott Hall and Kevin Nash appeared on WCW television as “invaders” and at the 1996 Bash at the Beach Pay Per View, Hulk Hogan joined them and turned heel.  That night, he declared his group as the “New World Order”, and it was the hottest angle that wrestling had seen in years.  Sean Waltman, who had wrestled as the 1-2-3 Kid in the WWE, joined as the sixth member of the group (Syxx).

The four chosen members of the New World Order have already been inducted into the WWE Hall of Fame.  Hogan entered in 2005, Hall (as Razor Ramon) in 2014, Nash in 2015, and Waltman as a member of D-Generation-X last year.  They join Ric Flair, Bret Hart and Booker T as two-time WWE Hall of Fame inductees.

It is unlikely that any of those other members of the New World Order will be added.

The group extended into two factions (black and white & NWO Wolfpack), Japan and was reincarnated in the WWE.

We here at Notinhalloffame.com would like to extend our congratulations to the four members of the New World order for this impending induction.

More in this category: « Ted Simmons and Marvin Miller elected to the Baseball Hall of Fame Batista named to the WWE Hall of Fame Class of 2020 »