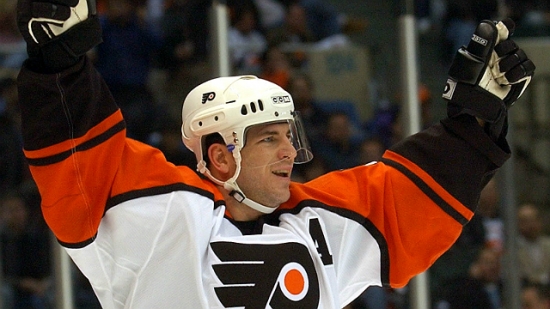 Mark Recchi had an interesting career in regards to his career with the Philadelphia Flyers and the other teams he played for.  The Right Wing would post his best individual seasons as a Flyer but he was a three time Stanley Cup Champion with three other teams (Pittsburgh in 1991, Carolina in 2006 and Boston in 2011).

Recchi arrived from Pittsburgh midway through the 1991/92 season and in that year he would be named a Second Team All Star and the next season he had career highs with 53 Goals, 70 Assists and 123 Points.  He would have another 100 Point season but he was trade to the Montreal Canadiens in a transaction that would bring John LeClair and Eric Desjardins to Philadelphia.  Coincidentally, he would be traded back to the Flyers and would win the Assists Title in 1999/2000 and was sixth in Hart Trophy voting, his highest ever.

Overall as a Philadelphia Flyer he averaged 1.04 Points per Game and totaled 627 Points for the organization in total.

Recchi was inducted into the Hockey Hall of Fame in 2017.