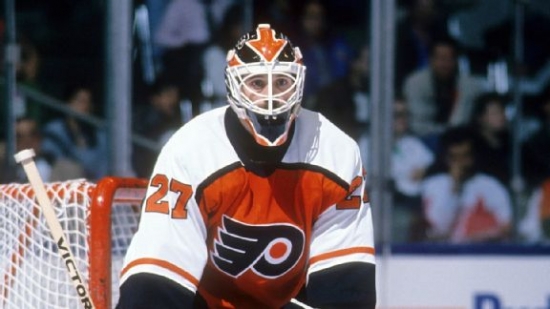 Hextall’s first season would see his win the Vezina, a First Team All Star Selection and he was ninth in Hart Trophy voting.  He was the league leader in Save Percentage, Wins, Goalie Point Shares and he was third in Goals Against Average.  Amazingly, he did not win the Calder Trophy as that went to Luc Robitaille of the Los Angeles Kings.  That was a great regular season but Hextall continued that brilliance through the playoffs where he backstopped the Philadelphia Flyers to a Stanley Cup Final where he had a playoff high 15 Wins and was named the Conn Smythe Trophy winner even though Philly lost to the Edmonton Oilers.

Ron Hextall may have never had a season like that again but this doesn’t mean that he was done.  A Goalie who was not afraid to leave his net and act as a third Defenseman, Hextall would win 240 Wins over his Flyers career, which spanned 11 seasons over two runs.  He would also finish first in Goals Against Average in the 1995-96 season.

There has never been a netminder like him before or since, and frankly we likely won’t ever.