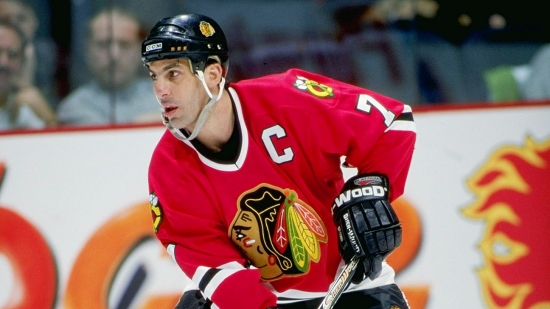 Granted, this list is supposed to focus only on accomplishments with the Chicago Blackhawks but when you are discussing an incredible talent and career like Chris Chelios some other components need to be mentioned.

First off, Chris Chelios is one of the greatest American hockey players ever and definitely the best U.S. born Defenseman period.  He played 26 seasons, tying the legendary Gordie Howe for longevity.  No blueliner has played more NHL games.  He would win two Stanley Cups in his 40’s with the Detroit Red Wings, and one in his 20’s with the Montreal Canadiens.  Internationally, the native of Chicago is a four time Olympian who won the Silver Medal in 2002 and the World Cup in 1996.  He would enter the Hockey Hall of Fame in 2013.

Damn, the way we wrote those first two paragraphs you would think he should be ranked #1!

The Chicago Blackhawks are an Original Six team so there is a lot of hockey talent that called the Windy City home.  Chelios was with Chicago only nine of his 26 seasons and was not a Stanley Cup winner there, though that was the most productive of his career in terms of individual tallies.

Chelios arrived in Chicago via trade for another Blackhawks Hall of Famer, Denis Savard and with all due respect to the latter it would become pretty obvious that it was Chicago that got the better end of the deal.  As a Blackhawk, Chelios was literally home and was ultra-popular.  He would win his second and third Norris Trophy with Chicago while being named to three First Team All Star Teams and one Second Team.  From the 1990-91 season to the 1996-97 season he never finished lower than sixth in Norris Trophy voting and he was even a seventh place finisher in Hart Trophy balloting (1992-93).  Chelios is still (as of this writing) the all-time leader in Penalty Minutes.

He would be traded to the Detroit Red Wings where he would continue to be productive and while Chicago accrued two First Round Picks for the legend the team that Chelios was traded to again got the better end of the deal.