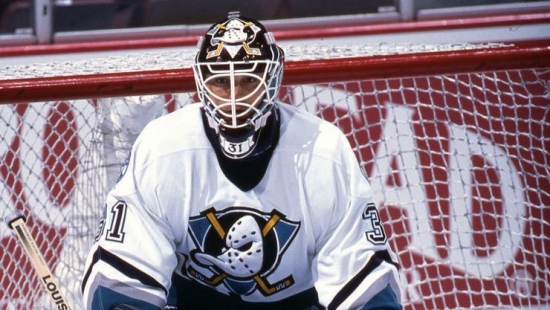 Jean-Sebastian Giguere would later overshadow Hebert regarding netminding accomplishments by a Duck, but Hebert was a great choice to be Anaheim's first lead Goalie.  Hebert played in 52 Games in his first year with the Ducks, posting a 2.83 GAA.  He slipped to a 3.13 GAA in 1994-95 but would go back to under three in his next five years as the Ducks' primary Goalie.  Hebert was named an All-Star in 1997 and was the league-leader in Save in 1998-99.

Hebert struggled in the 200-01 and was placed on waivers, to be claimed by the New York Rangers, but his skills fell, and he was out of the NHL shortly after.  With the Mighty Ducks, Hebert might have had a losing record, but that was more of a reflection of the talent around him, as his GAA (2.76) and Save Percentage (.911) reflects.