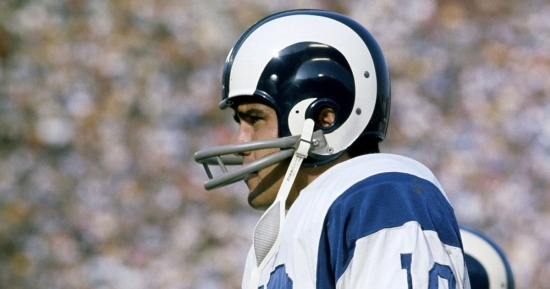 Roman Gabriel may have been the second overall pick of the 1962 Draft, but the former member of the North Carolina State Wolfpack took a long time to officially win the starting Quarterback job for the Los Angeles Rams.  Gabriel competed with veterans Zeke Bratkowski and Bill Munson but in 1966 the new Head Coach, George Allen eliminated all controversy by naming Gabriel the number one QB.

Gabriel responded with a good season, and he quickly became known as a pivot who did not make many mistakes (relative to the era), and in 1967 he began a streak of three straight Pro Bowls which he punctuated in 1969 with an MVP season where he also led the NFL in Touchdown Passes.  From 1966 to 1972 he would finish in the top ten in Passing Yards and his 22,223 Passing Yards as a Ram was excellent for that time frame.

As of this writing, Gabriel still holds the franchise record for Touchdown Passes with 154.