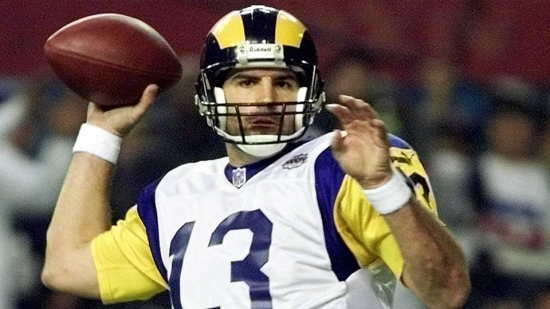 Like so many on the all-time Rams list, Kurt Warner was a hard one to place mainly due to the long existence of the franchise and the number of great players that they had.   So when you have a player regardless of the caliber who was only there six seasons but when three of those campaigns were as spectacular as what Warner had from 1999 to 2001 he has to be on this list at a high spot. Though we understand why you might think this is not high enough, or maybe if you believe this is even too high!

You all know the story of Kurt Warner.  From Northern Iowa to stock boy, to the Arena League to NFL Europe to the Rams to the Super Bowl.  There may never be another story like this again.  Warner became the starter in 1999, and from there he went into a three-year stretch that would eventually land him in Canton.  Surrounded by excellent talent (Faulk, Pace, Holt & Bruce) Warner took St. Louis to a 13 and 3 record while leading the NFL in Completion Percentage and Touchdown Passes.  Some people expected Warner to falter in the playoffs as they wondered how this story could continue!  He didn't wilt, and he would take the Rams to win their first and only Super Bowl while the team was in St. Louis.  Warner would win the MVP and the Super Bowl MVP that year.

Warner couldn't take the Rams to the Super Bowl in the season after but he was a Pro Bowler for the second straight season and would again lead the NFL in Completion Percentage.  2001 would see the Quarterback finish first in Completions, Completion Percentage (for the third consecutive year), Passing Yards and Touchdown Passes while taking the Rams to the Super Bowl (although this time they would lose) and win his second MVP.  He would be injured for most of the next two seasons and would be released shortly after, but there is no doubt that there was a three-year period where he was considered the best Quarterback in the NFL.

Warner would later take the Arizona Cardinals to a Super Bowl appearance (the first since in franchise history), and he would enter the Pro Football Hall of Fame in 2017.