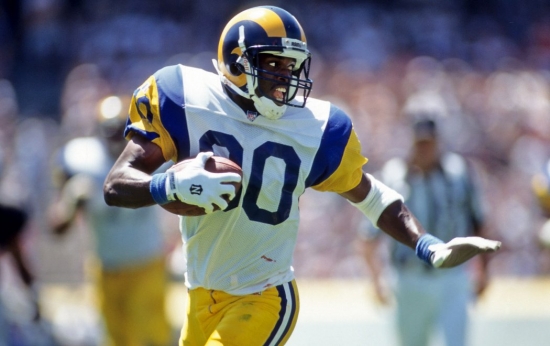 Isaac Bruce starred as the top Wide Receiver for the "Greatest Show on Turf," which is no small statement.  A Second Round pick from the University of Memphis, Bruce exploded with a 1,781 Yard season with 13 Touchdowns.  Amazingly, he was not a Pro Bowl selection that year but would be the next season when his 1,338 Yards led the NFL.  In 1999, Bruce would catch the game-winning Touchdown in Super Bowl XXXIV, and his play was an integral part of the Rams return to Super Bowl the next season, although they would lose to the New England Patriots.

Bruce would have four Pro Bowl Selections on his resume, and he would have eight 1,000 Yard Receiving seasons with 14,109 in total for the Rams.  Throw in his 84 Touchdowns, and you have one hell of a career that could easily see him enter the Hall of Fame.