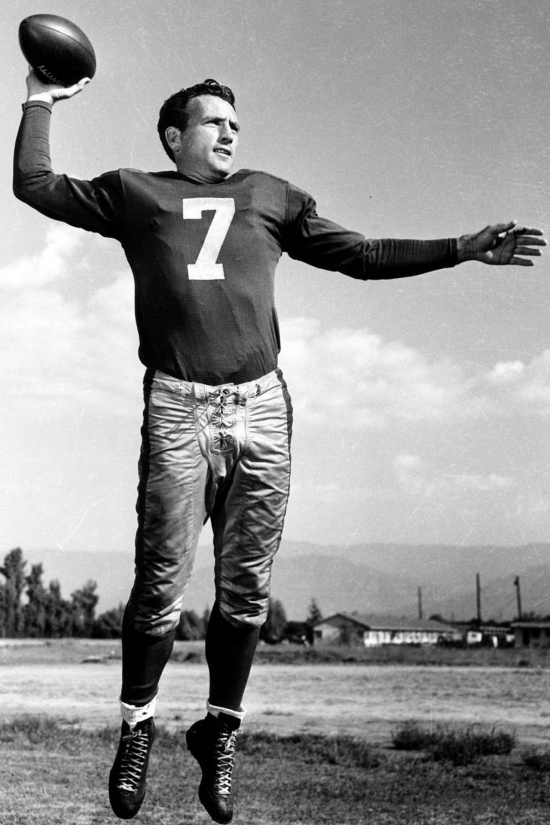 The passing statistics of Bob Waterfield may look poor by today's standards, but when he debuted for the Cleveland Rams after a great career at UCLA, he would take the Cleveland Rams to an NFL Championship as a rookie in 1945.  Waterfield was not just the teams Quarterback as he was also their Kicker and Punter, and defensively, he had 20 Interceptions as a Back.  He would win the MVP Award that season, a rarity for any rookie in any sport.

After that win, the Rams relocated to Los Angeles, but he was still an incredible player finishing second in passing yards, and he was chosen to his second straight First Team All-Pro Team.  He would regress a bit in the years after but in 1949 he was a First Team All-Pro again, and in 1950 and 1951 he would be named to the first two Pro Bowls.  More importantly, Waterfield would help the Rams won another NFL Championship in 1951.  In 1952, he would share the Quarterback role with another future Hall of Famer, Norm Van Brocklin.

The husband of Jane Russell (pretty impressive, right?) would later have a stable coaching career after his retirement following the 1952 season.

Waterfield would enter the Pro Football Hall of Fame in 1965, 13 years after the Rams retired his number 7.