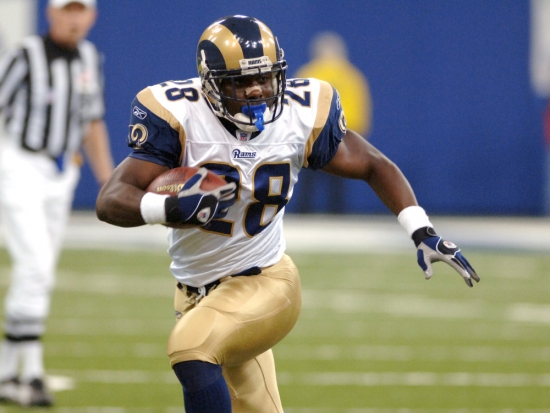 When we are speaking about the St. Louis Rams and the “Greatest Show on Turf” an engine needs to be referenced.  That engine was Marshall Faulk, the Hall of Fame Running Back for the Rams.

Traded from the Indianapolis Colts, Marshall Faulk defied what any offensive stars did in that situation and improved their skill set.  Already an elite Running Back, Faulk grew that aspect of his game and showcased a more fabulous receiving game where he would have a four-digit yardage game in 1999, which is a rarity for a Running Back.

Faulk was atop the leaderboard in Yards from Scrimmage in 1999 and his machine mode Running Back mode as a Super Bowl Champion can never be forgotten, especially considering what the team would accomplish overall.  He was the running game needed to help the Rams win Super Bowl XXXIV.

The legendary Running Back would enter the Pro Football Hall of Fame in 2011, his first year of eligibility.  The Rams also retired his number 28 in 2007