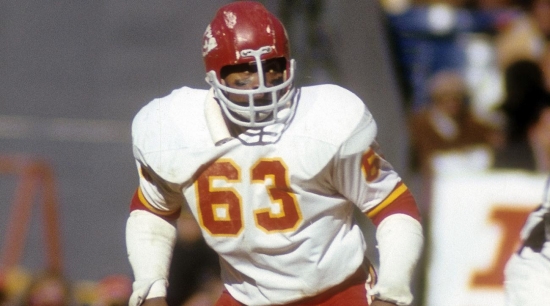 If you are reading this from the top to the bottom you are probably realizing that the late 60’s/early 70’s Kansas City Defense was pretty damned good and here we are with another defensive stud from that era in our top ten.

With Bobby Bell and Jim Lynch, the Chiefs’ Linebacker corps was among the most feared in football history.  Lanier would be named an AFL All Star in 1968, repeat the feat in 1970 and once eligible for the Pro Bowl he would rattle off five in a row.  Lanier was considered overly aggressive, even for a Linebacker.  In what would be banned today, Lanier attacked with his helmet and he was considered so vicious that padding was placed outside of his helmet to cushion the blow for his victims.  Lanier was one of the defensive leaders in their Super Bowl IV win and in the big game he recorded an interception with seven tackles.

Named the Walter Payton Man of the Year in 1972, Willie Lanier was chosen for the Pro Football Hall of Fame in 1986 and the team retired his #63.