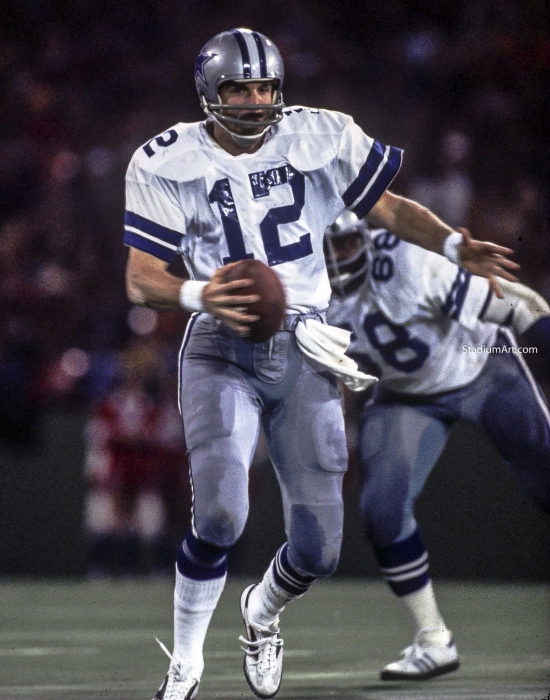 While a case could have been made for Roger Staubach to be at #1, #3 for this team still means you are a Hall of Fame caliber player.

Staubach was the 1963 Heisman Trophy winner, but as he was enrolled at the Naval Academy, he had to fulfill a military obligation before he would play football.  As such, he was a 27-year old rookie in 1969, but despite the late start, Staubach would put forth a Hall of Fame career.

Arguably, it was an even later start as he did not take over as the team’s starting Quarterback in 1971, taking over from a slumping Craig Morton.  He won all 10 of his starts that year, and would finish first Passer Rating (104.8), went to his first Pro Bowl, and took Dallas to their first Super Bowl Championship.

A separated shoulder kept him on the shelf for most of 1972, and after two above-average years, Staubach went on a five-year streak of Pro Bowl Selections (1975-79).  This run saw Staubach lead the NFL twice in Passer Rating, and another Super Bowl Championship in the 1977 season.  In his last season, Staubach would have career-highs in Passing Yards (3,586) and Touchdown Passes (27), and he clearly could have kept playing had he so desired.

Staubach would be inducted into the Pro Football Hall of Fame in 1985.