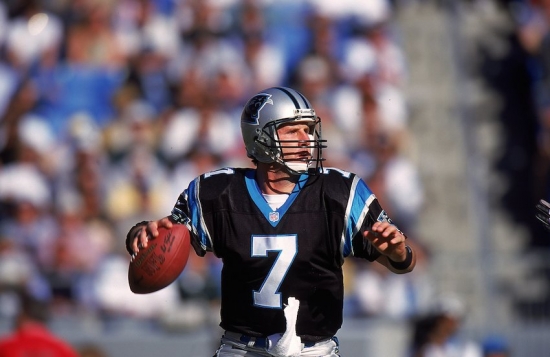 Steve Beuerlein bounced around the NFL in stints with the Los Angeles Raiders, Dallas Cowboys, Phoenix/Arizona Cardinals, and Jacksonville Jaguars before landing in Carolina where he would have the best run of his NFL career.

The Quarterback would back up Kerry Collins for two years, but in 1998 he would win the starting job permanently as the Panthers grew weary of his play and off-field issues.  Beuerlein would lead the NFL in Pass Completion Percentage that year, and in 1999 he would have his best season by far with a league-leading 343 Completions and 4,436 Passing Yards.  That year (which also saw him throw for 36 Touchdowns) would see Beuerlein earn his first only trip to the Pro Bowl.  He had another excellent throwing season in 1999 (3,730 Yards) before the 35-year-old was released in favor of a youth movement.

He would finish with the Denver Broncos for two seasons before retiring, and as a Carolina Panther, he accumulated 12,690 Passing Yards and 86 Touchdowns.